During this summer while the Carrboro Commons staff members have either graduated or completed J-459 (Community Journalism), this space follows the statewide ramblings of Carrboro Commons adviser Jock Lauterer, who, for the last eight summers, has led community journalism workshops at small papers “from Murphy to Manteo.” So far this summer he has visited with the folks at the Shelby Star, the Gaston Gazette, the News of Orange County, the Lake Norman Times, the State Port Pilot in Southport. Herewith is his latest blog from the mountain community of Waynesville where the Smoky Mountain News, a feisty upstart weekly, has made a name for itself with hard-hitting investigative reporting.

So the two-newspaper town is a thing of the past, right?

Not only do all eight N.C. major metro papers have cross-town print competition of some form, but more surprising is what Iâve found out there in the Tar Heel stateâs smaller towns on those âblue highways.â? 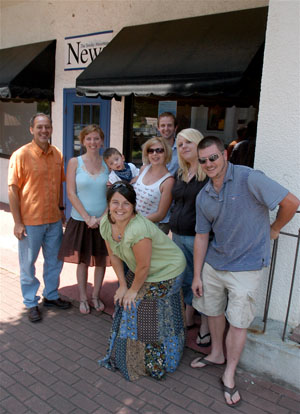 According to this yearâs NCPA guide and my own research, no fewer than 29 communities are dual-newspaper towns, and in many cases weâre talking about indy weeklies slugging it out in places one might suppose too small to support even one paper, let alone two.

(For a N.C. dual-newspaper town list, see the end of this story.)

This observation, gleaned over eight years of summer Roadshows on the backroads of North Carolina gives heart to this old newspaper hound. While the major metro newspaper industry may be in the âBig Chill,â? our community papers appear robust.

All this came into focus today when I visited with owner/editor Scott McLeod of the Smoky Mountain News, a free 16k weekly located right around the corner in Waynesville from another excellent indy tri-weekly, the Waynesville Mountaineer.

So how do they do it? The 9-year-old Smoky Mountain News (SMN) has carved its own niche with the aim of being âthe regional newspaper west of Buncombe,â? Scott explains. And their claim to fame? Investigative reporting!

You read that right.

Thus the SMN is able to successfully compete with at least four incumbent, more traditional community papers in Haywood, Jackson, Swain and Macon counties. It is this very branding and positioning that sets the SMN apart from the Highlander of Highlands, the Cashiers Crossroads Courier, the Sylva Herald and Ruralite, the Smoky Mountain Times of Bryson City and the Mountaineer in Waynesville.

âThe most important thing we do,â? Scott says, âis the choices we make of which stories we do.â?

And so, flipping through two issues (40-44 pp tab format) of the SMN we find fearless 40-80-inch investigative pieces on issues surrounding the troubled local hospital in Haywood County, the closing of a local railroad, building woes surrounding a problematic local highway, and multiple running stories on mountain area growth and development.

In fact, this year the SMN won first place in community service by a community newspaper in the NCPA awards program for their exhaustive coverage of growth and development in the mountains.

âWe are not a traditional community newspaper,â? Scott wrote to me earlier, âbut have hung our hat on doing the longer enterprise and investigative pieces most papers just donât do anymore. There is especially a dearth of this kind of coverage from small papers.â?

So, donât look for obituaries, local weddings, or photos of big tomatoes or grinning little leaguers in the SMN. But DO expect kick-butt-take-names coverage of all the heavyweight issues in the region.

The Smoky Mountain News, which Scott labels a âhybrid community paper,â? seems to have hit upon a formula for success.

In addition, the SMN has a lively and live editorial section â plus a host of specialty columnists covering books, A&E, gardening, nature, outdoors and music.

Oh, and did I mention, the SMN is profitable? Led by veteran ad director Greg Boothroyd, the SMN just won 11 first place awards in this yearâs NCPA Ad and Design awards program.

Another canny business decision: McLeod and Boothroyd publish a host of special-interest niche magazines including slick four-color productions for area Chambers of Commerce, home and design customers, a fine arts and antiques magazine, a guide to the 25-year-old Folkmoot international folk and dance festival, and high-end Smoky Mountain Living, a general interest magazine edited by Susan Lefler of Brevard (but originally from Chapel Hill!).

And a final testimony to this unusual newspaperâs internal health, when I visited I witnessed what I call a âhappy shop,â? in which I got the very clear impression that most of the reporters and graphics folks (20-30-somethings) had been there for years and had no intention of leaving.

A visit to such a vibrant community newspaper newsroom always leaves me wishing:

a.Â Â Â  I worked here
b.Â Â Â  I could bring a journalism class here
c.Â Â Â  And that I could beam down to this newsroom room all the newspaper industry funeral-goers.

Check them out at smokymountainnews.com