Each summer for the last 12 years, the Johnny Appleseed Community Journalism Summer Roadshow has brought “Journalism 101” to 175 small newspaper newsrooms across the state from Murphy to Manteo (from the Cherokee Scout to the Outer Banks Sentinel). Led by Jock Lauterer, founding director of the Carolina Community Media Project, the Roadshow is a public service outreach initiative supported by the School of Journalism and Mass Communication at UNC-Chapel Hill. This month, the ol’ perfesser visits the little mountain town of Burnsville where a sure-’nuff newspaper war is going on, and the new kids in town have already won national kudos. 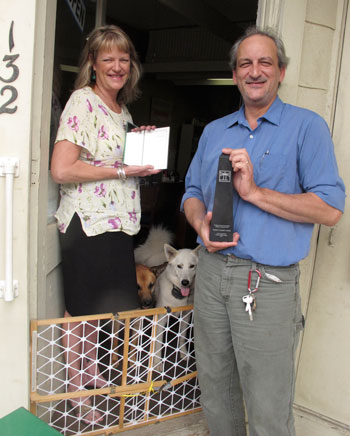 When Jonathan Austin says that, he looks you right in the eye, a little ironic grin playing on his face, as he nods his head slightly, watching to see if you ‘get it.’

Austin, 51, along with his wife, Susan, is living that mantra. No sooner had they launched their dream project community weekly in the quaint N.C. mountain town of Burnsville than all hell broke loose.

In a nutshell: they busted the county sheriff’s dept.

Their fearless watchdog reporting has not gone unnoticed. In only their second year, the Austins have garnered unprecedented national attention for their exposure of corrupt officers in the county sheriff’s office.

This spring the Austins were honored with two of the nation’s top awards for ethics in journalism: the Ancil Payne Award for Ethics in Journalism and the Edward Willis Scripps Award for distinguished service to the First Amendment.

“I was shaking,” Jonathan concedes when he got the congratulatory email.  And he adds with satisfaction, “We beat out Bloomberg.”

At a 1,200 circulation start-up weekly. A mom ‘n’ pop shoestring operation with two dogs in the front office. How cool is that.

Jonathan concludes, “It’s been the most fantastic and energizing year and half of my career.”

A STANDOFF IN A TWO-NEWSPAPER TOWN

To be fair, when the Austins launched their paper in the winter of 2011, theirs wasn’t the only paper in town. The Yancey Common Times Journal, is a widely read 7,000-circulation award-winning and respected weekly.

The folks at the Times Journal are confident they will weather the competition.

“We’ve been through a few newspaper wars,” says Times News Editor Jody Higgins, who herself launched the Yancey Common Times back in 1990. Her paper eventually merged with the competition Yancey Journal in 1995, and now is majority-owned by Bob Tribble of South Carolina under the heading of TRIB Publications, Inc. However, keeping it local, both Higgins and Times Journal publisher Pat Randolph have part ownership in the paper.

And, mind you, the Times Journal as won their share of awards too. Jody told me, via e-mail. “I just counted the awards on our walls — there are 30. But the “award” I like best is a poster (with handprints, names and drawings) up there with the real awards from the K-1 class at Bee Log Elementary thanking us for teaching them why a community newspaper is important. I also received the Governor’s Volunteer Award for assisting with teaching journalism at the high school and for writing a grant to get equipment and set up a broadcast journalism program for the high school.”

However, when it comes to hard-hitting investigative reporting, the two papers take a vastly different approach; the Austins have been far more aggressive in their watchdog-style reporting and are willing to risk it all to report negative details about those in power. Predictably, not everyone in Yancey County is a fan of the News’ take-no-prisoners style of community journalism.

Be that as it may, the Scripps-Howard judges praised the Austins, writing that the Yancey County News had “exposed absentee ballot fraud, ethics violations, abuse of arrest powers and the theft and illegal sale of county owned firearms – all during the newspaper’s first year of operation and despite risks both financial and physical.” 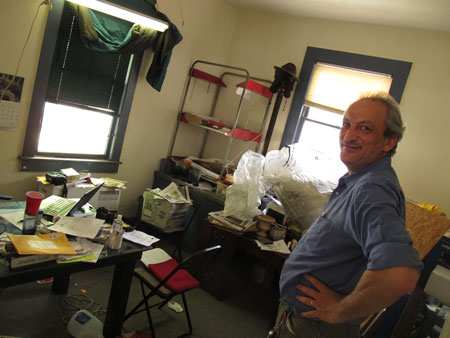 A 30-year journalist who also served as an Army Reserve drill sergeant, Jonathan keeps his “libel insurance” locked and loaded by his office door. “And I know how to use it,” he says convincingly.

The Scripps-Howard judges continue: “It is clear that the Yancey County News has had a significant impact on the rural North Carolina community it serves  (pop 17,000). In the short time since its founding, the newspaper has established itself as a check on local government by providing its readers insight into the practices of their elected officials.”

The Ancil Payne Award for Ethics judges called the Austins’ work “classic public interest journalism at great personal and economic risk. Shortly after it began publication, the paper reported a state investigation into elections fraud involving the sheriff’s dept. that other local papers had ignored. Also in 2011, the paper reported that the chief deputy, who many revered for his tough-on-crime attitude, was pawning county-owned firearms for personal gain. To take on the powers that be in a rural community where citizens are afraid to speak out against local law enforcement is very brave. To stake your livelihood and personal safety on it is above and beyond. This is an extraordinary example of serving the public good.”

Just off the square and across from the ice cream shop, the little office of the Yancey County News stands modestly, with its wide-open front door, blocked only by a baby-gate to keep the two “newshounds” Maddy and Gus, from straying out of the newsroom. Hardly the sort of storefront you’d expect from national award winners. Or maybe it’s exactly as it should be.

I had to ask Jonathan, Why Burnsville? There’s already a good paper here. But it had been a dream of his for 30 years, he said; his late dad lived here, and while Jonathan worked at the Hendersonville Times-News, the Statesville Record and Landmark and did a stint with the bigs at CNN.com in Atlanta — in the back of his mind there was always that dream cooking….how about starting a feisty little kickbutt weekly up in Burnsville? But he’d have to have a soulmate and a partner to make that fly. Susan was that key. They’d been school pals and best friends forever. When their first marriages fell apart, well…guess what happened. Susan, a skilled designer and former construction engineer, could be the ‘details person’ keeping the books, running the front office — while Jonathan could be the go-for-broke reporter and creative genius.

The formula has worked.  The News is a handsome “long tabloid” format paper, printed in Boone by the Watauga Democrat, with large attractive front page photos depicting “relentlessly local” content such as the high school prom night, a monster bear killed by a local bow-hunter, the Relay for Life event, a big truck wreck or a banner photo of the high school’s FFA club off to a national convention.

So what’s next for the Austins?  How can they ever top 2012? I’m sure they’d like to grow their circulation and advertising, because after all the awards and glory, a newspaper is a business with a bottom line just like any other business.

But I have an idea that the Austins also need to spread their mantra of “great journalism in Podunk.” So I’m having them come to UNC this fall to talk to my community journalism students. And the Austins need to be a part of next spring’s North Carolina Newspaper Academy; perhaps a session on fearless investigative reporting on the local level.

Wouldn’t that be a hoot? Stay tuned. I’m sure we’ve not heard the last of Jonathan and Susan Austin. Oh, and Maddy and Gus.