Yesterday my hosts took me to Cuandixia, a 400-year-old village, nestled way back high in the western mountains two hours west of Beijing.

Picture Jamestown, Virginia, as a living village and not a reconstruction or reproduction staffed by re-enactors, but rather inhabited by the descendants of the original settlers and colonists! They are not play-acting; they are living history. Not surprisingly, China has designated the tiny village as a national treasure.

The people of Cuandixia are like Han Meng Yun, a cheerful, gray-haired 60-year-old woman whose family has lived in the same compound for 15 generations. Offering us green tea, she pointed with pride across the little courtyard to a wall filled with 300-year-old Chinese characters – a veritable poster from an ancestor from the 1700s instructing the family how to live a healthy lifestyle.

The admonitions sound remarkably like something Dr. Andrew Weil would prescribe today: “Keep your body healthy, maintain a regular sleep schedule, get exercise, do not over eat, live simply.” 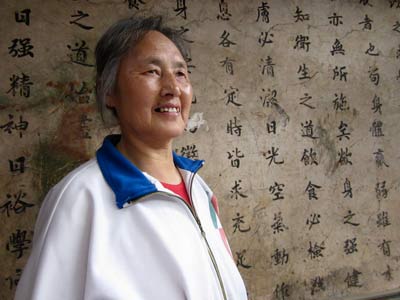 Later, dining at the café of Mengxing Han, I am befriended by the big bald owner who said he took an instant liking to me because of our similar hairstyle.

When Mr. Han announced that the specialty of the house was wild rabbit, there was no refusing the garrulous host. So wild rabbit stew it was. I’ve eaten wild game before, so that was no surprise. However, I was not prepared for the side dish, a yellow grainy soupy mix presented in a bowl. Assuming this to be yet another Chinese delicacy, I took my chopsticks and dug in…and what do you think?!

Grits! Yellow grits, in fact. There could be no doubt, made from the very same ground corn as our Southern staple. Talk about feeling right at home in spite of being 7k miles away in a 400-year-old Chinese village!

But Mr. Han had a second surprise in store for us. The big Buddha-like innkeeper sat beside us, telling us how much his health had improved in the five years since he started shouting at the mountain.

“Shouting at the mountain?” I repeated what I’d heard through my host interpreter.

“Yes,” he said emphatically, “I shout at the mountain. Two times a day, if business is not too heavy, and I can get away.”

And when he saw my look of disbelief, Mr. Han cupped his hands over his mouth, faced toward the valley below, sucked in a big breath, stuck out his chest, and let loose what could only be described as a bull-roarer.

The bellow lasted a full four seconds. Mr. Han put down his hands, and beamed at us with satisfaction.

Whoa, I said, that was quite a shout.

Leaning forward, he grinned, “Then you must join me! We will go together now and shout at the mountain. Somewhere far from the village where we can shout in earnest.”

So off we went, and after hiking north uphill of the village for 15 minutes, we came to his Shouting Place, a steep rocky gorge — and there, Mr. Han instructed his disciple on the fine art of shouting.

“It throws away the all the bad things,” he confided, thumping his chest before cutting loose again with a bellow twice the volume of the in-town shout.

Turning to me, he indicated it was my time.

OK, so here goes. I’ll give it a go. Standing beside my shouting coach, I mimicked his wide stance, hands cupped to my mouth like a loudspeaker, taking a biiiiiiiig breath —and together, two grown men, for Pete’s sake, bellowed, hollered, roared repeatedly for all we were worth.

Then we laughed, clapped each other on the shoulders like we’d been best buds since grade school and tromped back to the village, with all our “bad things” left up there on the mountain.