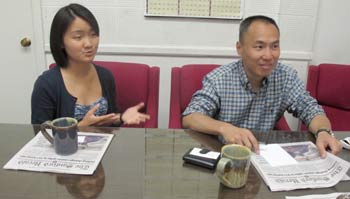 Headline: Mr. Joe to Sanford! A huge success with daughter Kate, who is a delightful kid, translating so effortlessly – and Publisher Bill Horner III going way beyond just being hospitable, spending three hours with us, answering all of Zhou’s many detailed questions – and then taking us and a crew of Heralders, including fave Editor R.V. Hight, ad director Gina Eaves and circulation director Jeff Ayers out to lunch for more substantive talk. 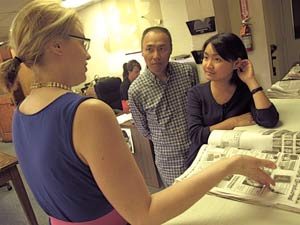 Back at the paper office, Zhou bore down, asking more pressing questions of Bill, as Zhou seeks to establish his newspaper in Shanghai as more successful pioneering model for China. His paper really is a beta site and he thinks the American community paper success story has lessons for him.

At the end of the day he invites Bill and me to Shanghai next summer for more talk, perhaps even a conference on Community Journalism. How cool is that?

I was particularly gifted to be able to spend one hour down and back  conversing with my new pals: Mr. Joe in the front seat and daughter Kate in back, leaning forward between us, translating our chatter with ease.

It was on the return trip to Greensboro, while brainstorming, that we came up with the notion of setting up a Sister Newspaper Exchange between Zhou and Bill’s respective newspaper groups.

So while today could have been just a  “one-and-done,” instead now it’s turning into one for the ages.

When I asked Bill what his take on the experience was, here is what he sent back: 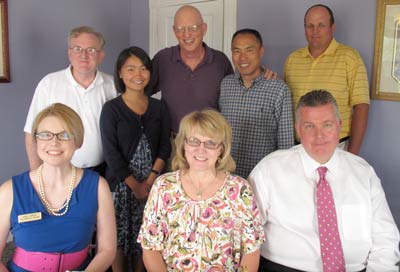 “‘Delightful’ doesn’t begin to describe the time with Mr. Joe and Kate during their visit here with Jock. Mr. Joe’s earnest enthusiasm for finding out how newspapering works for us, along with Kate’s buoyant translation, was energizing. There was both a genuine interest in understanding how things work “over here” and a realistic expression of the parameters under which Mr. Joe was bound to operate back home in China. The differing languages, culture and perspective didn’t dampen our time together, but rather gave life to it. It was an exhilarating experience.

Immediately after they left, we were all talking in our shop about how enjoyable it’d be to do it again – and soon. Jeff, my circulation manager, told me later in the afternoon that he’d love to have “just a day” to spend talking to Mr. Joe about marketing newspapers and reaching potential readers.

We’re not sure what’ll transpire next, but knowing that Kate will be in college nearby, and knowing Mr. Joe’s keen interest in Professor Karen’s book, has us hopeful for more time with Mr. Joe in the future.”