Home / Uncategorized / WHEN ALL HELL BREAKS LOOSE: Tornado coverage by the Sanford Herald

The April 16, 2011, tornadoes that raked North Carolina took practically everybody by surprise. Twenty counties were hit, and in each community, local readers depended on their hometown community newspapers for in-depth compassionate coverage that doesn’t flit away at the Next Big Thing. This is the story of one such community newspaper caught in the crosshairs.

In Sanford, pop 30,000, a tornado ripped a swath a half-mile wide and 10 miles long through the Lee County city, killing two and leaving a path of destruction unprecedented in the Piedmont’s history. But the small yet dedicated staff of the 9k circulation community daily Sanford Herald rose to the occasion, and many media observers are saying, set the standard of excellence for coverage of the disaster.

How did they do it? Less than a week after the storm, Herald Publisher Bill Horner III and Editor Billy Liggett spoke to my journalism class on April 21. Then a week later, Horner and Liggett, joined by staff photographer Wesley Beeson and reporter Billy Ball, presented their retrospective at the North Carolina Newspaper Academy THE LITTLE NEWSPAPER THAT COULD

How does a community newspaper respond?

When disaster strikes your community…when your town is in the eye of the storm…when the state and national media descend on your coverage area…and you have a primary mission of serving your community, yet your newsroom totals five full-time staffers…?

How do you respond?

And relevant they were. Horner says much of the credit goes to the leadership of Editor Billy Liggett, 34, who got his sea-legs covering Hurricane Katrina for the Lafayette Daily Advertiser in 2005. “I watched my editor there handle that emergency, and that experience prepared me for this,” Liggett explains.

Liggett, who lives only two blocks from the downtown Herald office, says when he heard that afternoon around 3 p.m. that tornadoes were coming, “I got my wife (seven months pregnant), my one-year old and my two dogs and went to the paper,”  — as safe a spot as anyone could think of. There he met other staffers including photographer Wesley Beeson, reporters Billy Ball and Sports Editor Jonathan Owens.

“We kind of stood around dithering for a while,” admits Liggett, until they heard on the police scanner that, “Lowes has been hit.” And then, “Big Lots and then Tractor Supply.” Those big box stores are all located about a mile southeast of the downtown Herald office.

“So we all piled in one vehicle and took off…” To get to Lowes, Liggett concedes they “did some things you probably don’t want to do…” and “weaved around neighborhoods and went through a back lot, a grassy lot…”

When they arrived at Lowes, Liggett says they found a scene of utter devastation. Not even first responders had arrived yet. Using his Flip camera, Liggett and began filming raw video, no narration, no interviews at first — just the roving camera sweeping the scene, punctuated by wind gusts and distant sirens. The resulting video is haunting, eerie, compelling — relevant. 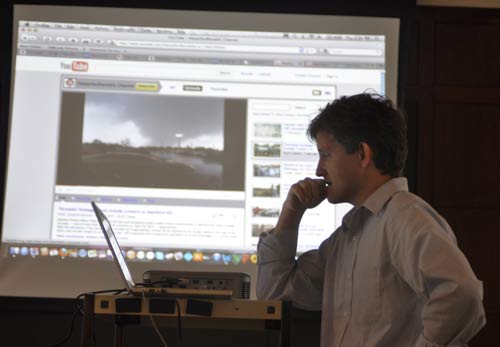 Liggett then posted those videos immediately to Facebook. According to Horner, The Herald has been a pioneer in the use of social media for a community paper, pointing out that they’ve been on Facebook for two years, and to his knowledge, The Herald was the first community paper in the state to have their own Facebook page.

That afternoon Horner, who had gone to the heavily damaged St. Andrews neighborhood, began posting to Twitter. Liggett followed, and suddenly The Herald started drawing a large audience of followers. Both Facebook and Twitter drove traffic to The Herald’s website (sanfordherald.com) as well, which Liggett says jumped from an average daily viewership of 4,000 to 44,000 —tenfold in a single day.

In the spirit of public service, Horner took down the pay wall to The Herald’s website for a week, reasoning, ”Money doesn’t matter (at a time like this). It was a matter of service.”

And as to the YouTube traffic, Liggett shakes his head, it was so large he says, “I can’t even put a number on that.”

PUTTING OUT THE PAPER

Even with the social media scoop and the exclusive content, getting out the next day’s print Herald would be a major technical and physical challenge. Horner convinced the print and design production team at the Durham Herald-Sun (a sister paper owned by Paxton Media Group that prints the Sanford paper), to give the Sanford team another six hours to put together their Sunday edition. The resulting Sunday morning edition carried the banner headline: “PATH OF DESTRUCTION”  running above the six-column photo by Wesley Beeson depicting the shattered remains of Lowes Home Improvement Store — a photo that not only anchored a keepsake front-page edition of The Sunday Herald, but also was picked up by AP, the New York Times, the Washington Post, the Weather Channel, and subsequently went worldwide. And Herald staffers did in-depth work on the back-story of how the nearly 100 customers and employees at Lowes all miraculously survived. (Additional reporting and writing was done by The Herald’s other full-time reporter, Alexa Milan, who had been out of town for the weekend, and part-time reporter Jennifer Gentile.)

Then Horner announced to Liggett that they should put out an extra edition for Monday, their usual day off.

With a wry grin, Liggett says that after he went in a small room and “screamed for a while,” he did it.

The exhausted but energized staff cranked out an eight-page add-free 5k-circulation Monday tornado special edition that was a tour de force of the storm coverage. Beneath Wesley Beeson’s banner photo of a woman picking through storm debris, the lead headline read “PICKING UP THE PIECES.” The extra was free to those who picked them up at The Herald office and 75 cents in the racks.

To my journalism students who were concerned about how many overtime hours The Herald staff worked, Horner rejoined that when something this big happens “you’re in shock…but we’ve got journalism in our blood…we’re news junkies…you forget about sleep…maybe we work 16, 18, 20 hours a day… because this is what we do.”

Horner praises Liggett and the staff: “the actual printed editions…have been absolutely phenomenal…”

Modest to a fault, Liggett responds, “I didn’t think we were doing anything spectacular…but we’ve been told this…

“This was a huge event for us. And it still is, and will be,” Liggett says, adding,  “The national media has already forgotten about Sanford.”

Far from being detached, The Herald staff took a personal hit; the tornado nearly totally destroyed the south Sanford home of special projects editor R.V. Hight, who along with his wife “literally survived by hiding in the closet,” Horner says.

And here I quote from Horner’s account from his Sunday, April 17, column: “…when television reports said the St. Andrews area of Sanford had been hit, our brief relief turned to panic. I immediately called the home of our longest-tenured co-worker at The Herald, R.V. Hight, hoping to hear good news. I knew from the tone of his wife’s “Hello” that things would be bad. They were OK, but their home was nearly totally destroyed. They survived by crouching inside a walk-in closet. A small army of us from The Herald eventually ventured into the St. Andrews neighborhood, working our way through gnarled traffic and, in some cases, talking our way past emergency crews. I cut through the backyards of several of his neighbors to get there, avoiding the largest gatherings of emergency officials. We greeted each other with tears and embraces – just as people did across the county on Saturday. The shock was palpable, and understandable. At homes in St. Andrews, there were gaping holes, collapsed sections of roofs. At R.V’s, a splintered piece of wood was driven cleanly into and through the bumper of one of the family’s cars. The remnants of a 2×4, also splintered…was driven into the home’s siding. Walls of one room collapsed, yet a bookcase inside the room wasn’t disturbed, the shelves’ books unmoved…Then news of the destruction of Lowes…and scores of injuries and possible deaths, came. We worked, we picked up, we tried to help. We tried to comfort. We’ll be doing that for a while…”

PICKING UP THEIR PIECES

Looking back and assessing lessons learned from the disaster coverage, Liggett underscored what many community journalists count on: because first responders and Red Cross personnel already knew and respected The Herald team, Liggett says his people had excellent access to the disaster site to the extent that they were practically “imbedded.”

Liggett also says that The Herald’s use of social media was an eye-opener for him. “I wasn’t much of a Twitter user,” he concedes, “but now…I definitely see the usefulness of it.”

How much of a bounce did The Herald get from their outstanding local coverage? Horner responds, “An awful lot of people have told us how much they appreciate us.” And he points to Twitter messages from grateful Herald readers, such as, “Much appreciated,” “Great coverage by the Herald,” and “Props to the Herald.”

And Liggett’s tweet: “Proud of my staff @ Sanford Herald for their work on our tornado coverage this weekend. Looks like a story we’ll be covering for a while.”

From a cold-eyed business standpoint, the publisher vowed, “Money has not been a topic (meaning pay for overtime and printing an add-free extra edition). We’ve got to serve,” Horner emphasizes, pointing out the paper’s slogan — “that Billy came up with: ‘To inform, to challenge and to celebrate.’”

In that spirit, they took bundles of free newspapers to be handed out at Red Cross sites. “Everything we do is done to drive people to our printed product.,” says Horner, who hopes The Herald’s coverage will “recapture some subscribers.”

Liggett observes, “Bill is always preaching about how the paper has to be relevant. This week a lot of people realized we were relevant.  And I think this event proved that newspapers are still relevant. When big events like this happen, that’s what people go to.”

Looking to the future, Horner hopes The Herald’s performance will not be forgotten by his readers. “The community needs us right now,” he says. “I want them to need us in two weeks when the sun is shining.”

4 Responses to “WHEN ALL HELL BREAKS LOOSE: Tornado coverage by the Sanford Herald”