Home / Uncategorized / The Summer of 11: a Roadshow Recap

It’s not called “the Blue Highways Journal” for nothing.

As many of you already know, the name comes from the title of the book by William Least Heat-Moon in which “blue highways” are honored as the narrow, winding two-lane roads where real America can be found.

Most of the newspapers I visit each summer on the Community Journalism Roadshow are off the beaten track, far from the numbing sameness of the interstates.

Last week I had a wild hair (the only kind of hair I have) — to attempt to drive from Chapel Hill to Marshville, sans GPS, map — or heaven forbid, stopping to asking for directions (which no self-respecting GUY would ever do!)

And all this on backroads. No four-lanes, no interstates just blue highways. I was doing just fine, driving through the rolling hills of the Uwharries south of Asheboro, feeling my way into Union County, past the endless fields of corn and soybeans along highway 138 to a place called Aquadale — when almost to my goal, I became hopelessly lost in tiny Oakboro. Shame upon this so-called Tar Heel, I had to admit defeat and look at the map, only to discover I was just 18 miles from my goal. I had driven three hours across the state by dead reckoning and was so close! 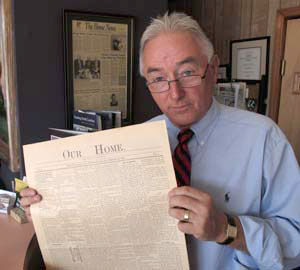 So here are snapshots from where the Roadshow went this summer:

• To The Home News of Marshville, where owner John Edmondson has run the 2,300 circulation weekly since buying the paper in 1997 and where he is pretty much a one-man band — though he is quick to point out that he couldn’t do it without the services of Brenda, the veteran office manager, who knows everyone in town. Edmondson writes most of the stories, takes the photos, sells the ads, and much more. In addition he notes, “I collect all the quarters out of the boxes – and I fix them, too.”

• To the Spring Hope Enterprise, where unstoppable editor-publisher Ken Ripley put on his teacher’s cap this summer as he mentored two high school kids who worked with him as interns. The tradition of community papers serving as “learning newspapers” is one Ripley really believes in.

• To the Sanford Herald, where we toured the tornado-ravaged neighborhoods that withstood the April 16 storms, and saw a town vigorously rebuilding.  And driving past the destroyed home of special projects editor R.V. Hight, we listened as R.V. described living through the storm, huddled with his wife in a closet. Yes, he’s as cheerful and buoyant as ever. Moving into a new place soon, and planning on writing a book about the harrowing experience. 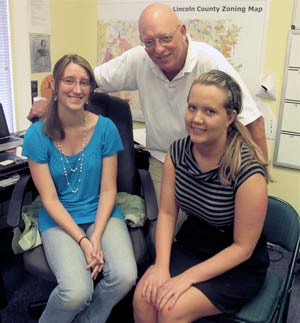 • To the Fayetteville Observer, where fourth-generation publisher Charles Broadwell sent a reporter to Greece this spring to do an in-depth feature series on the Greek-American community in Cumberland County. Repeat: they sent a reporter to Greece for a feature story. Not too shabby in these tough times, methinks. Staff Writer Kim Hasty was the winner of this year’s Pat Reece Fellowship, which honors the work, life and legacy of the late long-time Observer-Times reporter Pat Reece. Broadwell called the series “community journalism with international flavor.”

• To the Carolina Weekly Newspaper Group in Huntersville, where indy owner/publisher Alain Lillie bought the Huntersville Herald and launched six other free weeklies in the last decade in South Charlotte, Union County, Matthews-Mint Hill, Mountain Island, Mooresville and most recently in Denver on Lake Norman. Total audited circulation of these seven is 114,000. Not too shabby for a start-up.

It’s a phenomenon that DTH general manager Kevin Schwartz calls “ring around the metro,” and it’s gotten McClatchy’s attention: in the last two years the Charlotte Observer has launched their own string of neighborhood weeklies, including the South Charlotte News, the Union News, the University City News, the Mooresville News, the Lake Norman News and the Cabarrus News – a move I seriously doubt Sacramento would have approved without Lillie’s aggressive start-ups. 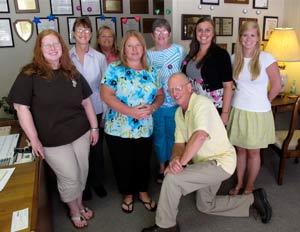 What I like about the Charlotte newspaper wars is that both outfits are hiring UNC community journalism grads. The Carolina Weekly group has four kids, fresh out of my class: Courtney Price, Tori Hamby, Will Bryant and Sarah Gilbert. And it should be noted, Courtney, editor of the Denver paper, and Tori, editor of the Mountain Lakes paper, are both only 23 years old! You go girls!

• To the Montgomery Herald in Troy, where, after my workshop, the seven women in the newsroom, led by editor Tammy Dunn, put on a sumptuous made-from-scratch lunch spread (homemade chicken salad, potato salad, strawberry cake for cryin’ out loud) that made me want to curl up on the rug and take a nap, or shake my head in delight and disbelief like old Bob Garner of WUNC-TV’s North Carolina Weekend (a man who never met a meal he didn’t like).

• To the Caswell Messenger in Yanceyville, where dynamic editor Angela Evans is spearheading a vast improvement in the looks, reach and sales of the Womack group weekly. Located right on Main Street just down from the distinctive county courthouse, the paper office is like Cheers (Where everybody knows your name), says Angela. Folks just come in to chat on a regular basis, which pleases Angela. 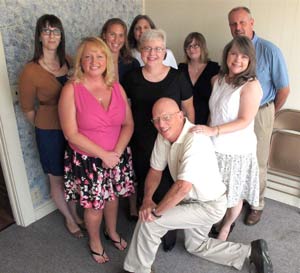 How well are they doing at the Messenger? Recently, when the newspaper delivery truck wrecked on the way back from the printer, thus delaying delivery by hours, a bunch of people phoned or came to the paper office demanding to know “where’s MY paper?!”

What’s that again about the death of newspapers?

• To the Butner-Creedmoor News, where editor/co-owner Fat Harry Coleman wears mismatched black cowboy boots, carries a bad-ass knife on his belt and has a shotgun hanging on his office wall above an engraved plaque reading: LIBEL INSURANCE.

Harry says that when angry readers storm into his office to confront him, and they spy the shotgun and its sign, it tends to dampen their enthusiasm considerably.

And Fat Harry ain’t fat. He gave himself that moniker after a New Orleans bar by that name struck his fancy. He signs his e-mails simply, “Fat.”  If that isn’t enough of an intro to a most unconventional small-town newspaper guy, then there’s this: Harry also presides over a fabulous museum of Tar Heel farm artifacts, gee-gaws and doo-dads that is housed above the main street offices of the weekly Butner-Creedmoor News, where literally thousands of 19th and 20th century farming and pioneer relics are on display.

• And to Gary Cunard’s Franklin Times of Louisburg, where 84-year-old associate editor Asher Johnson doubles as an EMT with the local rescue squad. Asher, a WWII vet and something of a local celebrity, told me about the time he answered an emergency call to a terrible car accident. As Asher bent over to aid the bloodied young man, the boy looked up at his rescuer and cried out, “Asher Johnson! Oh my god, I’m gonna be in the FRANKLIN TIMES!”

3 Responses to “The Summer of 11: a Roadshow Recap”