Home / Uncategorized / The Robeson Journal: a model of diversity

The 9th annual Johnny Appleseed Community Roadshow rolls into Lumberton in southeastern North Carolina where the 2003 indy startup weekly Robeson Journal is duking it out with the competition. Not only is this colorful “relentlessly local” paper making a go of it, but also there’s something else really special about the Robeson Journal. 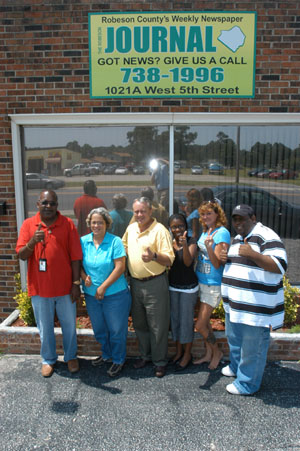 Too few are the number of newsrooms that accurately reflect the demographics of their communities.

But then, there’s the Robeson Journal of Lumberton, an indy weekly with a newsroom of that very nearly mirrors Robeson County’s historic diversity, equally divided roughly by thirds between black, white and American Indian (Lumbee) residents — plus a small but significant Latino population.

Six staffers attended my workshop, including the Journal’s publisher and account executive, who are white; the office manager, who is Lumbee; the editor, who is black and married to a Lumbee; the graphic designer, who is black, Cherokee and Latino, and the intern from UNC-Pembroke, who is black.

Owner and publisher Danny Cross, a Robeson County native, says the diversity of his staff was a happy accident. “I just went out and got the best people I could find,” he explains.

Whatever — it’s no wonder that the Journal is doing as well as it is in tough times and a crowded media market. The Heartland-owned daily Robesonian across town in Lumberton offers stiff competition. But the Journal folks are not intimidated, claiming they cover more diverse subject matter, and do it better and with more of a personal nature. And not surprisingly, they say they’re more in touch with the community — or communties.

A newspaper start-up is a risky and terrifying venture, but in spite of the times, Danny launched the Journal in 2003 along with partner James Locklear (who he later bought out) billing it, “Robeson County’s Weekly Newspaper, Independently and Locally Owned, Your Source for Community News.”

Going against the free model trend, they went paid from the get-go. “We wanted to start paid, because then if you have to, you can always go free. But you can’t start free and then go paid,” Danny reasons.

So far it’s working, with the broadsheet 14-16 page weekly boasting a paid circulation of 4,000. And when I asked Account Exec Jennifer Grant how the ad sales were going, she said, “OK.” Now, that may not seem very impressive at first glance, but there are plenty of metro daily newspaper account execs out there who would DIE to be able to make that statement.

So how has the Journal managed to compete successfully with the cross-town 12.5k circ daily that also claims to be a community paper?

Danny says the Journal is more local and more in-depth. He points to a special tab publication devoted to the Lumbee homecoming as an example.

“We do stories they won’t,” says Editor-in-Chief R. J. Walker, who himself is a force to be reckoned with — a big personable man clearly in love with his job and his county. Everywhere he goes, R.J. carries his Canon and fills the Journal with his photographic finds.

When it comes to the essence of community journalism, R.J. gets it. Every week the back page of the Journal is devoted to a regular photo feature called “R.J.’s Photo Gallery,” colorfully displaying upwards to 20 unassociated photos of people who didn’t make it into the paper anywhere else.

Explaining the origins of the feature, he says, “Wherever I am, at news events or whatever, I’m always taking other pictures, off to the side. So many people complained when these photos weren’t getting in the paper — I asked myself why don’t we DO something with these photos?”

It’s street photography, grab-shots of people waving back, grinning at the camera or caught in a candid moment. Not the stuff of Pulitzers, to be sure, but surely the stuff of that most sacred of home altars, the refrigerator. Grouped together, these guileless snapshots make for an irresistible package; a local hometown scrapbook-of-the-week.

And though it might not be obvious at first, R.J. puts a lot of effort into keeping the Gallery as diverse as the community. “I am very conscientious about the balance,” he says.

Readers love it. And now wherever R.J. goes, he’s sort of like Santa with a camera — people know what’s coming, and it might be their chance for their photo in the paper — doing nothing more than waving at the photographer!

“You never know if you’re gonna’ end up in the Photo Gallery!” R.J. says with a big grin.

But there have been times when folks would rather R.J. not take their picture. Like the time when R.J. surprised some local cops about to chow down on a box of doughnuts…R.J. says when he raised the camera, one of the cops said, half in jest, “I will KILL you if you take that picture!”

All joking aside, R.J. and his staff have nurtured their relationships with local news sources, including law enforcement. When something is going down, the police tip off R.J. on his cell phone.

“You said it!” is another eye-catching feature. A variation of the old “man-in-the-street” interview, this visual grabber spreads eight excellent mug shots in a skybox across the top of the paper above the nameplate. Each week, eight Robesonians are asked a question like, “Despite the economy, where will you be traveling this summer?” But the front teases you inside to page 13 to find the answers.

Look, I don’t even live there, but I was compelled to turn to page 13 to see for myself. And you know what? Everybody interviewed had some travel plans for the summer! That ought to make to Tim Geitner’s day.

“SUN JUNE 21 – FINALLY IT’S DEAR OLD DADS DAY. TRY AND LOOK OUT FOR THE OLD BOY OK? AND FINALY TAKING CENTER STAGE ITZZZZZZZZZZZZZ!!!!!!!!!!!!! THE THIRD ANNUAL FAIRMONT’S FANTASTIC 4TH….WELL MY FRIEND, THAT THE BEST I CAN SUMMON UP FOR JUNE. I KNOW YOU HAVE TO FIND SOMETHING THERE TO INTEREST YOU. COME JOIN US AND LET’S GET SUMMER STARTED RIGHT IN FAIRMONT.”

And here’s another human interest feature: folks send in (or R.J. shoots) church marquees around the county. The photo runs in a one-third page ad space paid for by local small businesses. Here’s one I saw: “Today is a gift. That’s why it’s called the Present.”

There is a flip side of the Journal’s willingness to cover so much. “We can’t be everywhere,” R.J. says, and this is especially apparent in the area of providing comprehensive sports coverage to area high school athletics. The Journal does not have a sports page, per se, nor do they have an editorial page. Journal leaders say both of these elements of the paper are areas in which they want to grow.

Naturally, they’d like to add more pages, and Danny says there is pressure from readers and advertisers to bump the Journal up to a twice-weekly.

But when it’s said and done, the Journal is what it is: a unique indy weekly that has clearly found a niche. The infectious voice of R.J. Walker sets the tone, and you can’t help but get pumped about community journalism when you hear him explain why he loves his job so much. It’s the variety and the stimulation; he comes to work and he never knows what’s going to happen. That keeps him hopping.