Home / Uncategorized / The Maxton Times: the cleanest news in town

I think I may have stumbled on the way to save newspapers. 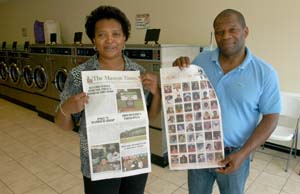 Operate them out of laundromats.

No, seriously. Think about it. People HAVE to wash their clothes, and while they’re spinning and drying, why not chat with the editor/publisher or buy an ad?

If you think I’m joking, come with me to Maxton, a little railroad town on U.S. 74 just east of Laurinburg and west of Lumberton — plunked down in the country too far from either daily newspaper town to merit much coverage. And this rankled Maxton natives James McDougald and Joyce McRae.

“We sit in the crack between these two towns and don’t get a lot of representation,” James explains. “We need a voice!” chimes in Joyce.

So they joined forces to start The Maxton Times, with their first monthly edition coming out last September.

“The Maxton Times is the newest monthly newspaper covering Maxton and the surrounding communities of Alma, Evans Crossing, Flora College, Gaddys Mill, Midway, Raemon, Red Hill and Prospect. Years ago, these communities received their (local) information from their high schools…” James and Joyce wrote in their inaugural edition. ”Now that the high schools are no long in Maxton…there has been a disconnect within the communities. A community and its people are harmed when the source of its information exchange and who it identifies with is taken away…By working together we will get our news out there, stay connected with our neighbors and build our communities.”

Did I mention that the paper is produced in James’ Laundromat? It’s named “Express Laundry!” for the CSX freight train that rumbles through Maxton several times a day just across the street.

“We just love doing this newspaper,” Joyce exclaims. “It’s just Maxton, but we’re having a ball.”

The fact business partners and lifelong friends James and Joyce are running a newspaper out of the Laundromat doesn’t faze customers. In fact, it is a friendly neighborhood gathering place, a social setting, what sociologists call “a third place,” and James knows this.

“Excuse me,” he says, stopping our conversation when the front door opens with a musical ding-dong, signaling another customer bearing a load of laundry. The publisher darts from behind the counter and hustles across the room (moving like the running back he once was) to grab a basket of dirty clothes. “It’s part of the service here,” Joyce explains with a smile.

The Maxton Times’ “newsroom” is like none other I’ve ever encountered.

Returning to the counter, James resumes. “It’s sort of like a (neighborhood) bar with regular customers.” Laundry customer/readers keep the paper full of birthday notices, photos of family and friends and congratulatory ads. Actually, now that I think about it, the paper sort of resembles and serves the same function as a laundromat bulletin board — always useful, informative, sometimes funny but never boring.

James and Joyce grew up together and attended the local elementary and old Maxton high school before going on to college, he to Wake Forest and she to UNC-G. Then they both had careers elsewhere — James playing college and a little pro football before selling for Fuji for 17 years — and Joyce in D.C. in banking for 20 years. But Maxton was never far from their thoughts or hearts.

“I physically moved, but I never left home. This is home,” says Joyce.

They’d been talking about coming “home” and starting a paper for about seven years before actually getting up the nerve to take the leap.

“When you come back to your hometown, you want to make a difference, “James says, “to help bring the community together…there are a lot of 50-somethings coming back here.”

Although the pages of The Maxton Times are filled with lots of dark faces, James is adamant that The Maxton Times is not an African-American newspaper, “Absolutely not, we didn’t want to typecast it as a “black” newspaper,” he says, explaining that Robeson County is “split one-third, one-third, one-third: black, white, Indian.” And then he adds, “I grew up on a farm. We ALL played together. We were too poor to be prejudiced.”

James and Joyce are Maxton boosters and make no apologies about that, although they’ve butted heads with city hall occasionally when they’ve told it like they saw it. “We do have lots of problems, but it’s home. I can talk about my family but you can’t!” James says with a grin.

This month, for instance, they took on Robeson County Board of Education member Jerry Young who stonewalled the long-delayed building of a new gym for the local middle school. Of the decrepit gym’s bathrooms, Joyce wrinkled her nose and says,” They are so bad, I don’t even know the word …horrible!”

One suspects that if The Maxton Times had not covered the outrage of the Maxton parents, that aspect of the story might have gone untold.

Of the police blotter that they print, James says, “If you don’t have the morals to do right, we’ll shame you into doing right.”

The Times’ slogan printed beside their nameplate reflects their agenda.

They would like to see Maxton grow, and promote new businesses like the new ice cream parlor that opened around the corner this summer. “She’s our own,” Joyce says of the store’s owner, “You got to promote your own!”

James describes his typical reader as ranging “from the unemployed to farmers, sheet rock hangers, mill workers, hospital employees and small business owners. They all feel they have something to offer, and we want them to do so.”

James and Joyce think the Maxton Times can be a catalyst for community-building. In a follow-up e-mail, James wrote, “We are living in a non-trusting world today. We want to start with Maxton and show the citizens they can trust their Maxton Times to give them the news of their small businesses, their kids at school, what their government officials are doing and bring a little hope about tomorrow, if they need some. Our Maxton High School (closed due to consolidation) gave the people to Maxton something to be proud of and we hope The Maxton Times newspaper can bring some of that back.”

One way they do that is with special event sections, such as the Mothers Day and Fathers Day spreads in which readers could print parents’ photos and a brief tribute for $5 each. It began modestly with the moms, and then by the June edition, they had two full pages and 96 dads honored in the Times.

PAYS FOR THE PRINTING

The ads that the 5k circulation free broadsheet monthly brings in pays for the printing, which is done in High Point. So far, neither James nor Joyce have taken any salary, “But we knew that from the beginning,” Joyce explains. They’d like to grow the paper to a twice-monthly (bi-weekly) but are content for now to just let the Times get traction — which is clearly growing. When the paper comes back from the printer, folks line up at the laudromat to get a fresh edition of the Times.

James hopes that the public support for the Times is real, and he likes the public radio business model so much that they plan to kick off a pledge drive in August.

As a youth James said he scoffed at community news, “Who cares about this?” he used to think when reading local news. But with maturity his attitude changed. “Now that I’m 52,” he vows, “I understand it.”

Talking to these two, you get the feeling they’re on to something more than just clean clothes. “This is our own little Mayberry,” Joyce says with a twinkle in her eye. “We kind of glow when we talk about it.”