Home / Uncategorized / The Garner Citizen: Put on your seat belts!

Over the last nine summers, I’ve led community journalism workshops at over 130 Tar Heel newspapers. This summer, I’ve decided to focus on the independent (or semi-independent) community papers, particularly the so-called “non-dailies,” which are clearly weathering The Great Recession far better than their big-city daily cousins. Last month I went to one of the state’s most “dug-in” pair of weeklies, the Clemmons Courier and the Davie County Enterprise Record of Mocksville where the average tenure of the staffers was in the double digits (including 85-year-old Sara Campbell, who’s been there 63 years!) This week, by contrast, I wanted to find out about a daring start-up over in Garner, just southeast of Raleigh. What I found there should restore your faith in the future of journalism.

WHAT KIND OF A FOOL…? 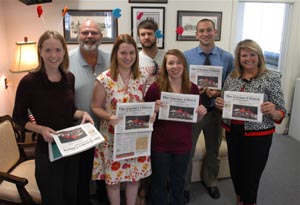 Newsprint, the office cat, had left her gray catnip mouse on the newsroom floor of the Garner Citizen, bearing silent witness to the old saying: You can tell it’s a community newspaper if there are kids and animals in the newsroom.

But the Garner Citizen (News & Times) isn’t just another 2k paid circulation weekly, of which there are literally thousands across the country. The bold newcomer to the Wake County newspaper wars, an almost 2-year-old indie, gives the lie to a snarky blog post I read recently: “What sort of FOOL starts a newspaper in 2007?!”

Answer: Adventurous entrepreneurs, who love journalism and their communities and who, in these times of newspaper churn, see and seize the opportunity.
In Garner’s case, that would be the sister-brother team of Debbie Moore Rodwell and Barry E. Moore, whose Vol. 1, No. 1, hit the streets of this “great little all-American blue collar town” (Debbie’s words) on July 24, 2007, out of a sense that Garner needed a “great hyper-local newspaper.”

From the get-go, Debbie and Barry have had a no-holds-barred attitude, thinking of themselves as pioneers taking part in a newspaper revolution and “redefining the newspaper world,” says Debbie, the energetic 40-something publisher with a career in marketing and sales. “We ‘re open to try anything. We think outside the box. Put on your seat belts!”

It’s difficult not to get pumped about community journalism when you’re around someone with so much positive energy. “This is the most rewarding job I’ve ever had,” she vows.

“Brother,” as Debbie addresses Barry, strikes me as a good business match. A retired police officer, Barry serves as executive editor, and grounds the paper with his solid business sense. When I asked him why they decided to charge (75 cents per copy and $39 a year) for their start-up, and why they didn’t go with the free model, Barry responded without a pause, “It never occurred to me to give anything away.”

The Citizen has a curious handle for a start-up with “News & Times” in smaller type tacked onto the bottom of the larger The Garner Citizen on their flag and business cards — a tribute I’m told, to the historic Garner News and a defunct paper named the Garner Times. Making this more confusing, there IS a Heartland Publications LLC-owned paper across town named The Garner News, and the competition includes the relatively new McClatchy bureau paper, the Garner-Clayton Record. If that sounds like a lot to go up against, Barry is confident: “I really don’t consider them competition,” the latter of which he says is spread too thinly over too much territory to be effective.

Both Debbie and Barry are locals, and they think that is central to how well they’ve done. “We are at all the functions,” Barry explains. “ We partner with everybody. We serve on commissions. We are local-local- local.” Debbie chimes in, “Our relationship to this community is organic. We’re home-grown.”

THE YOUNG AND THE ENERGETIC

If business acumen and energy describe Debbie and Barry, the word to describe their newsroom is: Youth. It’s a young and enthusiastic crew throwing themselves into this start-up, led by 28-year-old City Editor Paul Tambasco, a former 8th grade teacher who started at the Citizen in September after coming over from the Garner News. The other staffers I met were: 31-year-old Rachel Healy, the Web designer and editorial and production manager who’s been there about a year; Creative Director Courtney Flaherty, 23, who’s been there a year; Amy Townsend, 23, editorial assistant, who started in October; and Graphic Designer Jay Gross, a senior at Campbell, who just joined the staff.

Here’s another another dynamic: not one of the young newsroom staffers is actually from Garner. So, bottom line, the staff of The Garner Citizen is still just getting to know one another. And they are still getting to know Garner.

But novelty is one of the engines of a start-up, and Debbie is confident: “There are so many people out there cheering us on,” she says. “It’s like Christmas every week when I open the newspaper.”

Although at first Garner appears to be just another former small town engulfed by Raleigh sprawl, Citizen staffers make it very clear, their town is NOT Cary. So while in-growth has increased rapidly in recent years, the town situated just southeast of Raleigh still boasts a significant indigenous population of Garner natives.

“Garner has a very strong sense of identity,” explains Paul. As an example, Debbie points to the annual turnout for Garner’s Relay for Life, which she claims, eclipses the efforts of all the surrounding communities.

Also, Garner’s proximity to downtown Raleigh makes it attractive, says Barry. “Garner is closer to Raleigh than Raleigh is to Raleigh.” What used to be “the best-kept secret in Wake County,” is being discovered by families seeking small-town amenities within easy commuting distance of the big city. However, Garner is not the bedroom community it used to be, insists Barry, because the town now provides work, entertainment, lifestyle opportunities and options for its own residents. “You don’t have to leave Garner anymore,” he says.

But when you go looking for a “downtown Garner,” you will be hard- pressed to find much. Surely nothing like Mocksville with its classic tree-shaded courthouse square. Sadly, much of the Garner I saw was that mind-numbing generic American strip Sprawl Mall layout straddling highways devoid of a shred of local atmosphere, originality or character.

GIVING THEM WHAT THEY WANT

All the same, the Citizen aims at tapping in on Garner pride by “giving them a product they can’t get anywhere else,” Debbie says, pointing to two exhaustive graduation special sections devoted to the local high schools. The photographs, printed in the 32-page tab on hi-brite paper, are so crisp that they just about leap off the page.

Owners and staffers alike say they are looking forward to their first NCPA competition this coming year when they expect they’ll be in the thick of the folks walking up to the podium to collect press awards. And that wouldn’t surprise me one bit either.

ON TO WAKE FOREST

Next week I get to take a sentimental journey back to old Wake Forest, where the Allen family, in some iteration, has owned the Wake Weekly since the early ’50s. My own association with the Allens dates back to the ’70s when I had my own community paper. Since then, it has been my remarkable pleasure to watch the Wake Weekly grow into one of the state’s very finest weeklies.

I can’t wait to find out what they’re up to this summer. Stay tuned.