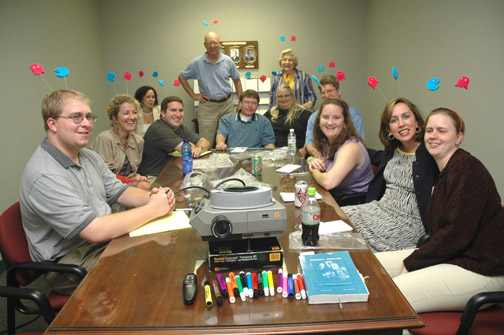 When I came back to Carolina in January 2001 and launched the Carolina Community Media Project, the primary goal was to make free, on-site journalism workshops available to all 190 North Carolina community newspapers.

In the spirit of playful adventure, I dubbed it “the Johnny Appleseed  Community Journalism Roadshow.”

I estimated it would take 10 years for this ol’ publisher-turned-perfesser to reach all 190.

WHAT’S IN A NAME? 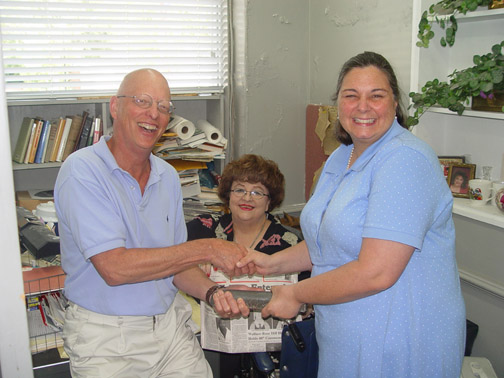 As to the Roadshow’s name, the tradition evolved to add one road warrior each year to the iconic “Johnny Appleseed” handle.

To date, the honorees include,

Charles Kuralt (On the Road With…)

Jack Kerouac (On the Road…)

Willie Nelson (On the Road Again..,)

Johnny Cash (I Been Everywhere, Man…)

And when Raeford publisher Robert “Bubba” Dickson suggested ‘possum for lunch when I came to his paper, that led to the “’Possum-Dodgin’” addition.

Yes, that’s right. We need two more honorees to make 10. Any suggestions? At year eight we ran out of ideas and breath, so just reverted to Mr. Appleseed for our namesake.

FROM MURPHY TO MANTEO 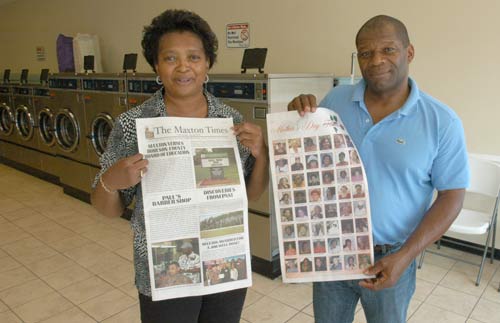 Since the first Roadshow in summer ’01, I’ve led workshops literally “from Murphy to Manteo.” (That’s from the Cherokee Scout to the Outer Banks Sentinel.)

I’ve brought my community journalism dog ‘n’ pony show to several of the state’s major metros where a roomful of glum staffers dutifully sat through my rant.

The most unusual newspaper I visited was James McDougald’s Maxton Times, housed in and run in conjunction with his Laundromat. Repeat, Laundromat.

The most unusual roadshow visit was with Al Carson of the Oxford Public Ledger, who, instead of listening to my stump speech, regaled me with a two-hour comprehensive essay on where to find and how to judge the state’s best hot dogs. 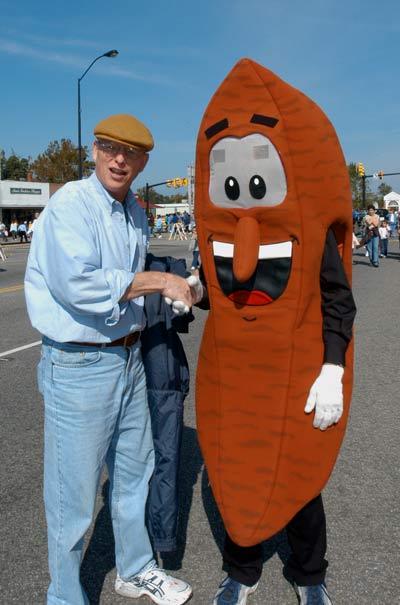 Along the way I’ve met the Yam Man of Tabor City (a marching sweet potato in the annual Yam Festival), a human newspaper in the form of the Mint Hill Times life-size marching newspaper (also used in parades), eaten mind-numbingly good barbecue in Lexington, and driven THROUGH a rainbow during a summer downpour in Scotland Neck, and been given a kiss on the top of my bald head by veteran editor Sammie Carter of the Wallace Enterprise.

Not one to just observe, over the past decade I’ve helped cover two US Open golf tournaments for the good folks at the Pilot of Southern Pines… and the annual Barbecue and Bluegrass Festival for Jeff Byrd’s crew at the Tryon Daily Bulletin.

I’ve also taken the Roadshow to spunky little indie upstart papers with the grit and gall to attempt a start-up in the 2000s: to the Smoky Mountain News in Waynesville, The Citizen of Garner, the Roberson Journal in Lumberton, the Surry Messenger in Mt. Airy — and right in my own backyard, the Citizen of Carrboro.

And there have been places that have given back to the ol’ perfesser — from mugs, umbrellas to ballcaps — even an old enlarger from the Daily Southerner of Tarboro. But my most prized thank-you gift was a “pig” (you old-timers will know what I’m talking about here) — a doorstop-weight hunk of printer’s lead left over from old hot-type days — awarded to me following my roadshow at the Wallace Enterprise. 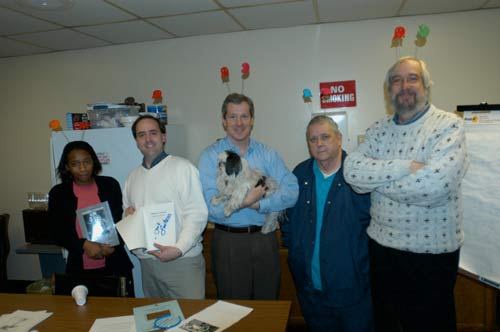 There have also been roadshow stops that have been sentimental journeys: to the Alleghany News of Sparta where I was a green-as-grass 22-year-old editor fresh out of Chapel College; to the Transylvania Times of Brevard where I interned one college summer and fell in love with a local girl and local journalism; to the Wake Weekly of Wake Forest where Bob and Peggy Allen hired me for the summer of ’84 (after Orville Campbell had fired me for the second time). I slept on a cot in their screened-in porch and became an honorary “Allen boy.”

I’ve only had one “speedbump” on the Roadshow: when I called to offer a workshop to the publisher of one of the Heartland papers, he hung up on me.

In this, the 10th summer of the Roadshow, I’ve been to Alain Lillie’s string of Charlotte Weeklies and Charles Broadwell’s venerable Fayetteville Observer (the oldest continuously-running paper in the state!) with projected stops later this summer in Greenville, Lake Lure, “Little” Washington and Louisburg — and who knows? — your paper might be next. So let the Roadshow roll on. Here’s to another 10 years.