A visit to the LNT at LKN

If you want to know how much Mooresville, N.C., has changed in a mere decade, just ask Bill Kiser, editor of the Lake Norman Times. 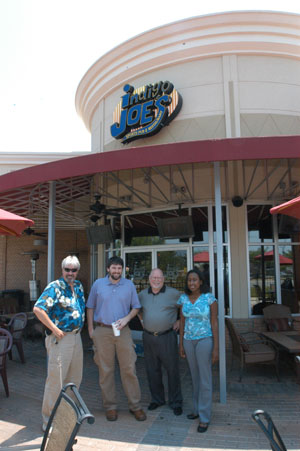 We are having lunch at âIndigo Joe’s,â? a hip new sports bar with enough wall-mounted TV sets to keep any sports junkie glassy-eyed.

And what is so striking about all this growth, is how NEW it all appears.

A native of this burgeoning southern Iredell County region, Bill says his parents watched the economic building boom happening and waited until they got an offer they couldn’t refuse. Then his mom and dad, like many others, moved somewhere else more rural. The way southern Iredell used to be. Before the lake and before the interstate changed everything forever. âIt’s hard to find a real native (of Mooresville). They’re selling and moving to Rowan County,â? he says.

The âengineâ? as it were, that drove and continues to drive the regional building boom is Lake Norman, built only in 1961 when the dam was built on the Catawba River, forming an immense body of water that straddles the borders of Catawba, Mecklenburg, Lincoln and Iredell counties, and located equidistant between Hickory to the northwest, Statesville to the north, Salisbury to the east and Charlotte due south. Easy access is afforded by I-77, a relatively new interstate that runs north-south and which literally bisects the lake in places, making that body of water something of an âurban lake.â?

You’ve heard of âMcMansionsâ? â those over-sized, over-priced, ostentatious homes plopped down in clear-cut former farmlands. Now take that to scale and you’ve got southern Iredell â what I call âMcCity.â?

In all fairness, I never got to the old historic downtown of Mooresville, which still exists. But frankly that’s not what concerns me. It’s the unchecked horizontal growth out along the once bucolic ways like Bill Kiser’s childhood rural home on Williamson Road.

Bills says he’s seen growth studies for the region that project southern Iredell will be fully developed by 2020. The entire four-county lake region already has a population of well over 100,000, according to Census figures.

Uh-oh. This place already feels âfully developedâ? â like it was beamed down pre-fab from California and then populated with folks from Central Casting. 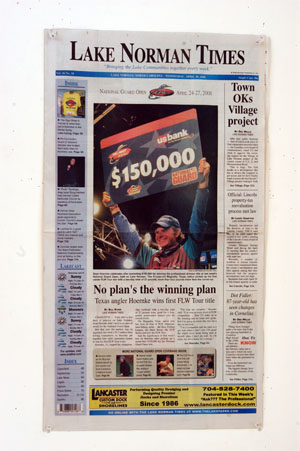 For the local paper, finding any âthereâ? there must be a challenge. A sense of place? A sense of community? One has to wonder. Except for the constant reminders of âRace City USAâ? (Ricky Rudd larger than life on the hotel âCo-colaâ? machine), this could be suburban Dallas, LA, DC or any other megalopolis â or what Penn State geography professor emeritus Pierce Lewis calls âthe galactic city.â?

If all people do is sleep here, or play on the water, then where is there any potential for civic live or civic engagement? And more to my mission of helping community newspapers better serve their communities â how does an authentic community paper find its way and attempt to build a sense of community in such a place?

I suspect these questions are central to the character, much less the future, of many community papers attempting to serve other âSprawltowns,â? former small towns transformed by pop-up gated communities with easy access to urban work centers. Other North Carolina communities and their quality community papers are facing similar challenges.

I’m certain this resonates with the folks at the Wake Weekly, the Holly Springs Sun, the Clemmons Courier, the Matthews News Record, the Mint Hill Times and the Weddington Post.

âBringing the Lake Communities together every week,â? is the mission statement printed right below the flag of the Lake Norman Times. How do they do that? What are the lake communities? For it would be simplistic to assume âThe Lakeâ? is one homogonous demographic, even though lakers proudly sport their classy European-style âLKNâ? auto license plates.

And money. Make no mistake about it. On the exclusive âPointâ? area, the homes start at a mere $500,000 and lakefront digs run well above a million bucks âwith helipads (I kid thee not) at posh homes owned by Charlotte bankers, corporate executives, racing stars and ball players for the Panthers and Bobcats. The same is true, I’m told, for the exclusive âPeninsulaâ? neighborhood in northern Mecklenburg County.

On the âLeft Side,â? the staff tells me, around the unincorporated town of Denver, are found more retirees and middle-to-upper-middle class neighborhoods.

Thus, the LNT, a 4,000-circulation paid weekly owned by Womack Newspapers out of Chatham, Va., has its work cut out for it.

With a full-time paid news staff of three (Editor Kiser and reporter/photographers Dru Willis and Lacey Hampton â along with a legion of local columnists), the LNT covers not just the lake and Mooresville but also the nearby towns Cornelius, Davidson and Huntersville â and to a lesser extent Troutman and the town of Catawba â as well as unicorporated communities of Denver, Stanley, Sherrills Ford and Terrell.

To further complicate coverage issues, their coverage area includes no less than 10 high schools, with that number slated to grow soon too.

And the LNT is not without competition either – not just from Media General’s larger and older Mooresville Tribune, or the Fortenberry family’s independent News @ Norman (from Denver), or Tucker Mitchell’s bumptious indy Huntersville Herald, but also from niche publication âlake papersâ? produced by the Charlotte Observer, Statesville Record and Landmark and the Lincoln Times-News.

Kiser’s guiding principle is simple. They’re not trying to cover the communities on or around the lake so much as they are âcovering the lifestyle on or near the lake,â? he explains. In a phrase: âTHINK LAKE.â? That mantra results in a wide variety of story topics that appeal to folks who live the lake life. Their quarterly tabloid, HOOKED on Lake Norman, is chocked full locally generated stories and fine photos. The regular 32-page broadsheet weekly stays locally focused on lake life as well. A smattering of stories from recent editions:

â¢ Long-term effects of the recent drought on the lake (now just 1.7 foot below what’s known as âfull pond.â?

â¢ How boat owners are adjusting to rising gas prices â plus where they can find the least expensive gas at one of the lake’s 15 marinas that sell gas.

â¢ A local charter boat owner who took 300 soldiers for a free day on the lake to celebrate Armed Forces Day.

â¢ A legal row over sharing LKN water with the towns of Concord-Kannapolis.

â¢ The results of a professional bass fishing contest in which the winner took home $150,000. The winner looked like a NASCAR race driver in his logo-studded cap and jacket. Who knew?

Other notable characteristics of the LNT include: regular excellent photo pages covering local festivals, an attractively laid-out editorial page (but no editorials!), columns on fishing and sailing by local experts, plus lots of features on local folks.

I especially liked a weekly front-page feature titled âOne to Know,â? in which reporters spotlight a single local resident. A random sampling from May included stories on a comedian, a life coach for area women, a potter, a retired 87-year-old schoolteacher and two Boy Scouts working to complete their Eagle Scout rank. This is good stuff, reinforcing Charles Kuralt’s mantra that âeverybody has a story.â?

On the business and production side: LNT General Manager Chris Montgomery acts as both publisher and advertising manager. He has three ad sales reps, one graphics person and one classifieds staffer. Like other Womack papers, the LNT carries strip ads across the bottom of their front page, a practice I am disinclined to applaud, but as a former publisher, can appreciate.

The paper looks to me to be a healthy print product, one with a very clear news and feature focus, and though I wish Womack would allow for a stronger local editorial voice at all their papers, the LNT is a graphically handsome and newsy all-local community paper.

Photography is absolutely one of their strong suites, and Bill Kiser’s regularly stunning photos of skiing, sailing and other lake life make for a really fun read. More than once I’d turn a page and find myself exclaiming âWowâ? over one of Bill’s photos. (OK, don’t get the big head, Bill. Drew had one photo that earned a Wow too.

BACK TO THE PARKING LOT

When the day’s workshop was over and it was time to go home, I chose not take those âblue highwaysâ? but instead to scurry down I-77.

As luck would have it, few of motorists were going south TO Charlotte at 4 p.m. on a Wednesday.

But thousands of commuters were all trying to get OUT of Charlotte. Guess where they were going.

When students ask me why I get so worked up about Urban Sprawl, I wish I could show them this picture: For miles from Mooresville down to Charlotte, I-77 was a veritable parking lot. And it didn’t help matters that the thermometer read 92 degrees.