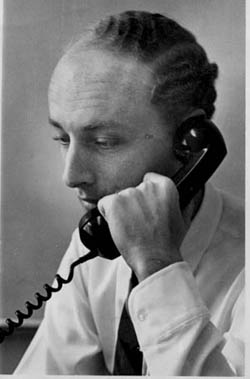 In the recurrent dream I’ve had for years, I enter a small-town newspaper office that is strange and yet vaguely familiar. As I search for my desk, Ron Paris materializes before me, greeting me with his characteristically merry war-whoop, directing me to my place.

When my old partner of 30 years ago died in late August after a two-year battle with cancer, his family, former employees, friends and colleagues hailed the deceptively built Ron as “the little giant,” “the last true community journalist” and a “champion of the community” and “a pioneer.”

Ron was all that and more. I was privileged to serve as his junior partner and co-editor/publisher along with Business Manager Bill Blair during the best days of my working press life, the nine years from 1969-1978 when our start-up, THIS WEEK in Forest City, grew into arguably the best weekly in the state — a creation that was largely the result of Ron’s vision, hard work and unswerving dedication to excellence in community journalism. (The “little paper that could” went daily in 1978, but in my opinion the Daily Courier never measured up to the weekly. Our conversion to daily prompted me to sell to my partners and start the weekly McDowell Express in Marion in 1980.) 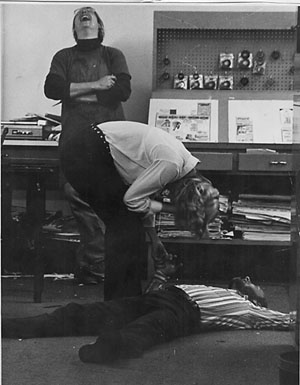 But I never lost touch with Ron, nor did I ever stop revering and respecting him. Ask anyone who ever knew Ron: he could be in turn loud, irreverent, fun-loving, outrageous and boisterous — but at the same time he was our unflappable rock-solid leader, a newspaperman in every sense of the old expression.

Woe be unto the pompous business or civic leader who mistook Ron’s slight built for a sign of weakness.

“Powerful people would come and try to tell Ron what to do with the paper,” said friend and Forest City businessman Maxie Jolley, speaking at Ron’s memorial service on Aug. 28, “and he’d tell THEM what THEY could do with the paper!” (if you get Maxie’s drift).

“You couldn’t’ impose on the Little Giant,” Maxie said. Adding, “He bought ink by the barrel and wasn’t afraid to use it!”

Or, as his daughters wrote in their tribute: “He was a DO-It man, not a say-It man.”

Ron left behind not just a loving family and a grieving community, but also a veritable THIS WEEK and Daily Courier alumni association. Over his 29 years as editor, he ran what many considered one of the state’s best community journalism graduate schools. “Graduates” include New York Times best-selling novelist Tony Earley and Asheville Citizen-Times Editorial Page Editor Joy Franklin, the latter of whom will never forget when she misspelled “threadbare” and received the following note from Ron: 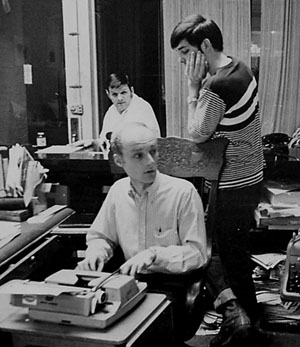 Joy concludes, “Only Ron Paris could call you a dumb@%* and somehow make you feel it was a term of endearment.”

Tony Earley remembers the time as a cub reporter when he returned from a particularly fractious town council meeting, telling Ron, “If I write the truth, those people will come down here and kill me!” — to which Ron responded evenly, “You write the truth; I’ll take care of the calls.”

And you can bet the little giant did just that.

My memories of 11 wonderful years of working with Ron (with nary a angry word between us!) flash like a slide show with images of both the serious and comedic: cutting up in the backshop, installing the press, putting it all on the line editorially and financially when we came out pro-ABC in a historically dry county, covering the harrowing dragnet of a cop-killer, or the time Ron and I rode a bicycle-built-for-two down a major highway construction project to get a first-hand look at the progress. 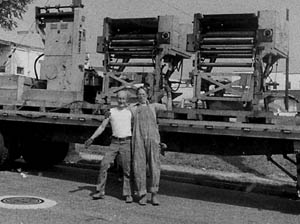 We were always describing ourselves as “intrepid” reporters, quipping upon such zany occasions: “Bet they don’t do THIS at the Charlotte Observer.”

After selling the paper to Paxton Media Group in 1998, Ron threw himself into local humanitarian volunteer work, notably as a leader with Habitat for Humanity, the Jaycees, the United Way, the McNair Foundation, the local community college and Smart Start. Ron will also be remembered as past president of the NCPA, three-term member of the NCPA board and School of Journalism Foundation of N.C., Inc. board member.

I saw Ron for the last time this summer a month before he died. In spite of the obvious toll the cancer was taking on him, Ron had just come in from installing bathroom tile. We sat there over lunch telling newspaper war stories from old times, cackling like schoolboys. I shall miss him terribly, my veritable older brother, unstoppable and irrepressible to the end. And still showing me the way.

Join me in honoring Ron by contributing to a scholarship fund in his name. The Ron Paris Prize will be awarded to an outstanding N.C. student specializing in community journalism. Checks should be made out to The School of Journalism and Mass Communication, the Ron Paris Fund, and sent to Jock Lauterer, 213 Carroll Hall, campus box 3365, UNC-CH. Chapel Hill, N.C. 27599-3365