Home / China / In which we see “happy China”

The most surprising thing I saw in China – not that Tiananmen Square or the Great Wall weren’t amazing — was at the Park at the Temple of Heaven where my host took me early this morning to “watch the old people doing funny things.”

I had no idea what she meant by that, but went along because Prof. Karen has been consistent when it comes to surprising me. What I saw was a  demonstration of the fitness craze that has enveloped the elderly population of China. 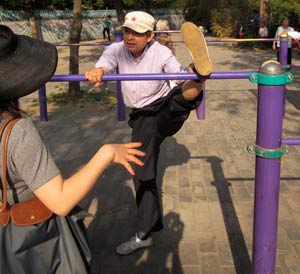 There, in an immense green space (like a Beijing version of Central Park), we witnessed thousands upon thousands of retirees participating in dozens of different physical activities. Here’s a smattering of what we saw, old folks working out on outdoor gym equipment, stretching, doing calisthenics, playing board games, dancing, doing Ti Chi, playing badminton, engaging in a four-square kicking game like our “hacky-sack” except the average age of the senior athletes looked to mid-60s.

I repeat thousands. And it is a daily spontaneous outpouring of therapeutic P.E. that does on, not just here, my host tells me, but in parks in every city across the land every morning, regardless of the weather. 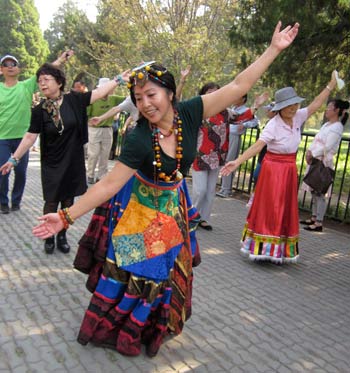 Well,  no wonder I’ve seen no fat old people. If they’re not walking or biking, here working out!

For instance, at one open area, an antique portable tape player blared raucous regional folk music for a throng of elderly participants, many in colorful traditional garb, who were engaged in Tibetan folk dances.

Around the square in a clockwise flow, the hundreds of dancers moved in aerobic rhythmic gyrations, smiling, sweating in the morning sun and clearly loving it. 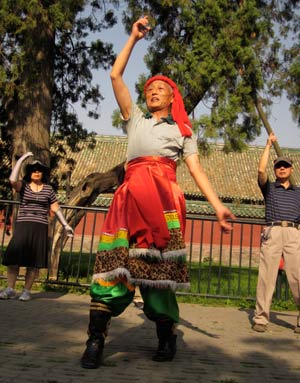 For the life of me, I found the seniors in the park today to be one of the best examples of camaraderie, togetherness and fellowship I’ve seen in any city setting anywhere in the world. And I found myself thinking: Who says “community” doesn’t exist in China?

Then an odd thing happened. Suddenly I noticed a handful of Chinese professional-looking photographers taking photos of ME! My host noticed too, warning me, “American journalists are regarded as dangerous here — because you always say bad things about China. That is the opinion of our government.”

It also seemed to be her opinion — and perhaps with good reason. Once, during her year of study in the U.S., a local reporter asked her point-blank if she was happy living in China.

“Why not?” she responded, offended that the American journalist assumed she led a miserable existence in China.

“That’s why,” she explained to me, “I wanted to show you… happy China.”

6 Responses to “In which we see “happy China””