Home / China / In conclusion: Under one moon

“Life can only be understood backwards; but it must be lived forwards” wrote Swedish philosopher Soren Kierkegaard.

And so it is with an experience like this. I have attempted to put pen to paper, fingers to keyboard, to faithfully record the events and narrative of my two brief weeks in China; a quick window into an ancient culture in a vast land in dramatic flux. 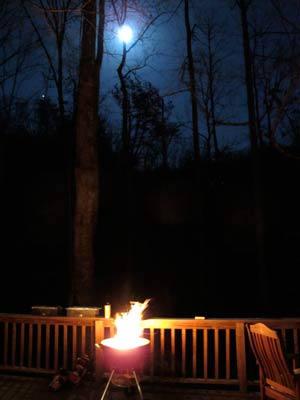 That I succeeded in any way in a bit part of that that larger play as a walk-on supporting character is due in large part to another community — a community of friends and colleagues.

I have to first thank the U.S. State Department’s Fulbright program for funding this trip and seeing the rightness of the project. My own school, led by Dean Susan King, former Dean Jean Folkerts and Dean Emeritus Richard Cole, all encouraged me to pursue this project.

In my home state of North Carolina, I must acknowledge the generous donation of time and expertise made by caring and dedicated community journalists that led directly to my adventure in China: Robert Dickson of the Carrboro Citizen, Kevin Schwartz of the Daily Tar Heel, Mark Schultz of the Chapel Hill News, Charles Broadwell of the Fayetteville Observer, Bill Horner III of the Sanford Herald, David Woronoff and Steve Bouser of the Pilot of Southern Pines, Ray McKeithan and Brownie Futrell of the Washington Daily News, Ken Ripley of the Spring Hope Enterprise, Megan Ward of the Shelby Star and Alain Lillie and Courtney Price of the Carolina Weeklies Group of Charlotte.

In China, a host of academics shouldered the task of making my stay productive while comfortable — notably, I must express gratitude to Xin Xin of the Journalism Department at the Communication University of China for the hospitality she extended me. Of course, without the hard work and dedication of my partner, Assoc. Professor Chen Kai, none of this would ever have happened: her study trip to N.C. in 2009-2010 that resulted in “our book,” and the Fulbright to China — were all due to her vision and dogged determination to introduce Community Journalism to China. I am forever indebted to her.

Indeed, I am indebted to a host of good folk, each of who embody each of my great experiences. At the Great Wall of China, I see my photo-buddy Zhang Hai and my Mongolian drinking partner; at the ancient village of Cuandixia is see Mr. Han, the shouting man of the mountains; at the park of the Temple of Heaven there was this one elderly Tibetan dancer who kept smiling at me; one the college campuses where I lectured I see the inquisitive, attentive faces of “Grace” and “Adam” and “Lou” — no doubt the leaders of tomorrow. When I think of Beijing Duck, I see “Frank,” my host’s bright 13-year-old son, instructing me on the finer points of Chinese eating customs while proudly wearing the UNC Tar Heel visor I brought him. And when I think of the future of Chinese community journalism, I see “Mr. Joe” and remember his enthusiastic rapid-fire Mandarin directed right at me, as if his passion could transcend any language barrier.

On the last night in Beijing, the pollution abated, allowing a pale quarter moon to float between the zoomy downtown skyscrapers. Twenty-four hours later I am back in Chapel Hill, in the good old US of A. And this evening, as I slipped back into my routine — mowing the lawn, taking out the garbage, picking up the mail — something bright overhead caught my attention.

There in the Carolina blue sky, floated the moon. The very same moon that floats over Mr. Joe of Shanghai, Mr. Han of Cuandixia, Xin Xin and Prof. Chen of Beijing, and “my students” at Renmin U., Tsinghua U. and the Communication University of China. In that brief instant, 7,000 miles of physical distance and 5,000 years of cultural difference melted away.

May “Mr. Joke” always keep that vision of the same moon. For does it not shine on us all?

So here’s to next year in Shanghai, or Chongqing, or even Beijing again. There is much work to be done; and this little foray was but a beginning.

As Dean Emeritus Richard Cole has taught us to say: 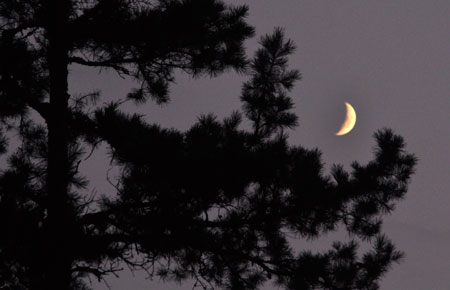 6 Responses to “In conclusion: Under one moon”