Home / Uncategorized / Gene Roberts never got too big for his britches 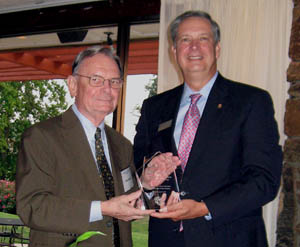 Everyone needs a hero. Gene Roberts is mine.

But even when he reached the top, he never turned into what my mama used to call “Mr. Big Britches,” â never forgetting or denigrating his humble Eastern North Carolina journalism origins; and that’s one of the many reasons why I honor him so.

To my great delight, I’m not the only one. The North Carolina Press Association named Roberts its 2008 “North Carolinian of the Year” at their annual summer convention in Asheville on Friday, July 18.

Introducing Roberts, NCPA President Tim Dearman, publisher of the Statesville Record and Landmark, saluted Roberts as “a native son of North Carolina who never forgot the lessons he learned here.”

Roberts, a Pulitzer-Prize winning former managing editor of the New York Times and the Philadelphia Inquirer (17 Pulitzers from the latter) and co-author of the 2007 Pulitzer Prize-winning book, “The Race Beat,” got his start at a small community daily paper, the Goldsboro News-Argus in Wayne County, where he was the farm reporter.

There, the UNC-CH grad made a name for himself with the well-read feature titled “Rambling Through Rural Wayne,” which contained, in Roberts’ own words, “family reunions, recipes for sage sausage, sweet potatoes who looked like Gen. Charles de Gaulle…so the world could be exploding, but the Rambling in Rural Wayne had to come out.”

Let me share two emblematic Roberts stories that he allowed me to print in the third edition of my textbook and field guide, “Community Journalism: Relentlessly Local” (UNC Press, 2006.)

In 1968, more than 10 years after leaving the News-Argus, Roberts was sent to Vietnam as a war correspondent for the New York Times. During the height of the TET offensive, he found his way to the embattled city of Hue, the scene of the most intense, street-to-street fighting. One day, he went to interview beleaguered U.S. troops dug deep in an underground bunker. He introduced himself, âMy name is Gene Roberts. I’m with the New York Times…â?

But out of the gloom Roberts heard a soldier’s voice with a distinctive twang.

âHey!â? the soldier exclaimed, âDid you ever write the `Rambling in Rural Wayne’ in the Goldsboro News-Argus?â?

Looking back on that experience, Roberts chuckles. He may have been a big-time war correspondent for the vaunted New York Times, but what impressed that soldier in the bunker in Hue was Roberts’ farm column in an 8,000-circulation community newspaper in the rural South. No matter the size, it was the soldier’s hometown paper, a thing of inestimable value.

âI learned valuable lessons from the News-Argus and my tobacco farmer readers,â? says Roberts. âBecause I was linked closely to events that were important to farm families, Iâand what I wroteâbecame important to readers in a way that I never was, before or since.â?

Roberts likes to tell how Henry Belk, his mentor and the former editor of the News-Argus, used to edit copy. Because Belk was blind, Roberts would have to read his stories out loud to the old editor.

Blind Henry Belk would sit there in his big oak armchair, head titled back, the warm humid air blowing in off the city square, listening intently as Gene would read his pieces aloud. And if a story didn’t work or didn’t suit old Henry Belk, he’d cry out loud, âMAKE ME SEE IT, GENE. MAKE ME SEE IT.â?

ZIG INSTEAD OF ZAG

Here at the UNC School of Journalism and Mass Communication, Roberts created a prize to reward annually the student journalist who is also a good storyteller. You can hear Roberts’ words sing in the following challenge, engraved upon the plaque in Carroll Hall:

The Eugene L. Roberts Prize is meant to encourage and is dedicated to the story of the untold event that oozes instead of breaks, to the story that reveals, not repeats, to the reporter who zigs instead of zags, to the truth, as opposed to the facts, to the forest, not just the trees, to the story they’ll be talking about in the coffee shop on main street, to the story that answers not just who what where when and why but also, âSo what?â?; to efforts at portraying real life itself; to journalism that âwakes me up, and makes me seeâ?; to the revival of the disappearing storyteller.

Roberts, who is now a journalism professor at the University of Maryland, also told me, “Nothing is more important to American journalism than the editor who sees the people he covers every day.”