Home / Uncategorized / A Visit to One Very Cool Web-Savvy Newspaper

Jock Lauterer is the NNA’s newly-appointed grand poobah of community journalism, but the title he really likes is âguy.â? Jock is also the director of the Carolina Community Media Project at the School of Journalism and Mass Communication at the University of North Carolina at Chapel Hill, where he teaches, among other things, community journalism. A former community newspaper editor-publisher, he is also the author of the leading text on the subject, âCommunity Journalism: Relentlessly Localâ? UNC Press 3rd. ed. 2006. Contact him at jock@email.unc.edu

For each of the last eight summers, Jock has led workshops at smaller papers across his state. Here is his first blog post from this summer’s Community Journalism Summer Roadshow.

That word kept cropping up during my Roadshow visit to the Shelby Star earlier this week.

And while âcoolâ? may not be a word most folks associate with newspapers, but it sure applies to the Star.

For the Star is no ordinary community paper. In fact, it may be one of a kind, and an industry leader too. 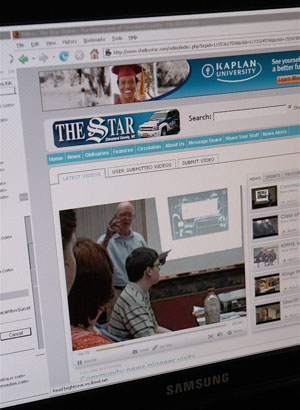 Since 2006, the 15,000-circulation Freedom-owned daily in the foothills about one hour west of Charlotte, N.C., has fused the print edition with the paper’s Web version, shelbystar.com, in every way conceivable.

And frankly, when I visited last earlier this week, the newsroom had more of the feel, energy and go-go-get-this-up-now of a 24/7 broadcast station.

âThe Shelby Star was blown up its newsroom – figuratively,â? explains a release from the Southern Newspaper Publisher’s Association. âThe paper’s newsroom no longer operates like a traditional newsroom and the newspaper doesn’t read like a traditional newspaper. It’s more local. Easier to read. Easier to digest (no jumps!) More interactive. And it fuses with the paper’s Web site.

âReporters now consistently work to find every opportunity to enhance a story with online content (usually video). Staff photographers and reporters carry video cameras (usually the inexpensive and simple to use Flip) on assignments. Editors encourage the community to submit comments, photos and video. The newsroom has added an Web master and a Web-savvy managing editor (Joy Scott, the Star’s award-winning former investigative writer) and Web content increasing has fused with the print product.â?

For instance, the day I was at the Star, a downtown fender-bender netted Chief Photographer Jeff Melton an easy news photo since it occurred just down the block from our lunch spot. But upon getting back to the newsroom, we learned that there had been two other local wrecks around the same time.

In a manner of minutes Jeff had posted on shelbystar.com a brief story accompanied by his photo and a locator map spotlighting the three wrecks. No waiting for tomorrow morning’s newspaper around here!

And it gets cooler.

What looks like souped-up SUV turns out to a reporter’s version of the Batmobile â a rolling mini-newsroom equipped with dash-mounted video camera and wireless laptop all connected to the Star Car’s Wi-Fi antennae that allows reporters and photographers to transmit stories, photos, audio and video live from the field.

How cool is that?

Very cool. In fact, according to Publisher Skip Foster, cool has become something of a marketing factor for the Star.

âPeople see that we’re not a sleepy little paper,â? he says. âThe Star Car has become a real brand identification factor. I couldn’t put a dollar figure on its worth.â?

The mobile newsroom has been a real boon for covering breaking news. Since its debut last fall, the Star Car has revolutionized how staff covers hard news. Jeff cited a car-train collision, a murder-suicide, and earlier that week, tornado-chasing in the upper end of the county. 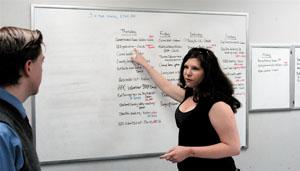 âWhen we started posting information to shelbystar.com, customers came calling in numbers we never dreamed of,â? former Publisher Jennie Lambert told SNPA. Lambert, who has since become publisher of the larger Freedom-owned Gaston Gazette, is quoted by SNPA as recalling a memorable incident two years ago right after the Star had converted to the new dual platform: âA surveillance film from an armed robbery in uptown Shelby generated 7,000 downloads within the first 36 hours. We see this response repeatedly. People are telling us that they want a combination of raw data and journalist-produced reports with more photos, audio and video clips.â?

The Star Car even changes how they cover local high school football. Now they can transmit video from their game of week, edit back at the newsroom and put it up later that same night.

Not only that, but the new Web presence allows the Star to get more local content out to customers. For instance, the print edition of the Star might print two photos from a Friday night football game, on the Web Jeff says he might post as many as 30 photos from the same game.

Another example: While the paper would print only the photo of the winning high school homecoming queen, on shelbystar.com customers can find pictures of all 12 candidates AND their escorts.

For the shelbystar.com to work, there has to be staff buy-in. And this was a major theme I witnessed. The Star’s newsroom is comprised of about 18 staffers who are a mix of locals (like chief photog Jeff Melton, a native of Shelby) and bright new kids from other places. But all are Web-savvy and video-friendly. This 20-something generation has grown up using video and digital cameras practically as toys, âso it’s not much of a stretch to get them into our multimedia world,â? observes Editor Jon Jimison.

I saw this in action when I was in town. Reporter Kirsten Thomas had covered the Gardner-Webb University commencement the night before. There on today’s front page of the newspaper was her six-inch (no jump) story.

BUT, she had also shot video, which SHE had edited that same night and posted before midnight. Instead of viewing this as a burden, Kirsten, an L.A. native with a master’s in journalism, told me, âWith the Internet you’ve got to take advantage of all the mediums.â? And it’s a brave new world that requires risk-taking.

Editor Jon Jimison recalls âit was kind of scaryâ? when the Star put up a drug bust story âcompletely without editing.â? But Jon thinks this is just a new dynamic newsfolk may have to get used to. âThere’s not always going to be an editor around,â? he says.

Doubters have only to check out the shelbystar.com Web site to see the variety of breaking local news that the Star covers. Skip Foster’s enthusiastic staff includes an editor, a managing editor, a city editor and a design editor, and the staff is comprised of (depending on how you do the counting) about five reporters, two sports guys (an editor and assistant editor), two photographers, three copy editors, and a Webmaster.

As to measuring up to Charles Kuralt’s ârelentlessly localâ? standard, the print edition I’m looking at today is about 80 percent local, while the Web version of the Star appears to be chocka-block 100 percent local.

From a business side, the experiment is still a work-in-progress. While the Web page views are through the roof, compared to pre-2005 figures, print circulation has remained flat, according to the publisher. Foster notes, âWhile print revenue is tough, we continue to make headway with online advertising.â? The silver lining is that the Star’s online revenue is up 76 percent over last year.

So what are the downsides to fusing the Web and print news operations?

It takes a lot of time in the newsroom to shepherd all those reader-submitted photos and videos, explains editor Jimison.

Also, Publisher Foster says, âWe used to talk about `feeding the beast,’ but now in this 365 â 24/7 operation, it’s worse â and it’s better. The beast has to be fed many many times a day.â? Foster wonders that perhaps the sort of time-consuming, in-depth investigative reporting that the Star was once famous for, has been sacrificed at the expense of the Star’s new âthis-just-inâ? imperative.

Maybe so, but whatever the Star is doing, they sure seem to be doing community journalism right in this new age. I left Skip Foster’s shop wishing I were 20-something again, fresh out of college and full of spit and vinegar.

The transformation of the Star was the brainchild of Jon Segal, president of Freedom’s Community Newspaper Division, according to a SNPA release about the âInnovation Project,â? in which Segal picked the Star to be the company’s incubator for new ideas at the community daily level. The Star Car, at roughly $60,000 is a joint project between Freedom Communications, the international newspaper trade association known as IFRA, and the University of South Carolina’s âNewsplexâ? at the School of Journalism and Mass Communications at Columbia which donated about $15k worth of technology for the car.