Home / Uncategorized / A Sentimental Journey back to the Wake Weekly

In this, the 9th summer of the Community Journalism Roadshow, our latter-day Johnny Appleseed is targeting indy and semi-indy non-daily newspapers, which are clearly weathering The Great Recession far better than their corporate-owned big-city daily brethren. This week our rambles take us to the Wake Weekly, a paper we’ve been following for 40 years. Forty years, y’all!

Q: What kind of a weekly can support a staff of 17? There has always been something special about the Wake Weekly. I first heard about the paper 40 years ago when I was myself in the community newspaper biz, having just started THIS WEEK, an innovative weekly in Forest City (with partners Ron Paris and Bill Blair) that leaned heavily on my large black-and-white photographs.

After we pretty much swept our first NCPA competition, I got this call from this total stranger in Wake Forest named Bob Allen wanting to know how I managed to capture high school football action photos without using flash.

“I’m not about to tell you,” I responded impolitely, ”because then you’d know my secret and you’d try to beat us next year in the photo competition.”

Bob has long since forgiven me for my youthful arrogance, but I still wince at the memory.

Because 15 years later, when I was a freshman “perfesser” at UNC and in need of a summer job, who made a spot for me? Yes, Bob (and Peggy) Allen of the Wake Weekly. And I don’t think they really needed me, so much as they just realized I was needy. That summer of ’84 I slept on a chaise lounge on their screened in porch by the swimming pool, and I pretty much became just another Allen boy.

Speaking of kids, if Bob and Peggy hadn’t had four sons, they wouldn’t have had much of a staff back then. But I mustn’t forget Production Manager and Fixer of All Things Al Merritt, who, though he is not an Allen, might as well be.

Ten years after that wonderful summer of ’84, I wrote the first edition of my community journalism textbook and field guide, and in that field guide, I held up the Wake Weekly as the gold standard of excellence for a community paper. All these years later, it still is.

Now in 2009 as much has changed in the ecology of the newspaper industry as it has with the Wake Weekly. But one thing has remained, it’s still a drop-dead great indy newspaper, though Peggy has passed on and Bob has retired after selling the paper to son Greg. The roughly 8k paid circulation 32-page broadsheet paper is now run by wife Janet Rose, with able assistance from General Manager Marty Coward, in my humble opinion one of the really great community journalists in this state — and of course, Al Merritt, who is still there after 53 years!

And who should greet me at the front desk but smiling Davis Allen, third-generation newspaper guy, all grown up and getting ready to go off to Elon this fall.

Following Peggy’s untimely death in ’04, I set up a scholarship fund at the J-school to honor the life and legacy of one of North Carolina’s truly great ladies of community journalism. Each year I select an outstanding UNC student who is awarded $4,800 to support a summer internship at an excellent N.C. community paper. Here are the winners and where they interned:

And for 2009, it seemed high time to send this year’s recipient of the Peggy Allen Award “home” — as in home to the Wake Weekly. And that’s where Heather Mandelkehr is spending her summer, already having a memorable summer, by the looks of things. 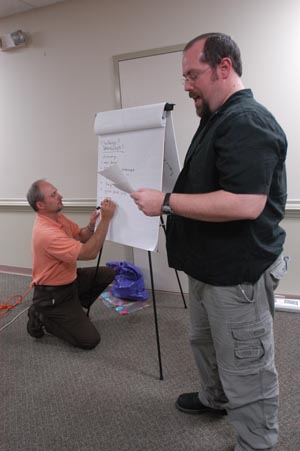 A DIFFERENT KIND OF WORKSHOP

So, you can see, coming to Wake Forest was a sentimental journey for this old community newsie. And because I respect this paper and it’s people so much, I really wanted to do them justice and to give them something they could use.

Southern Pines PILOT publisher David Woronoff provided the inspiration earlier this year when he had me lead a think-tank session with his staff — sort of a strategic long-range planning session. Using poster-sized Post-It Notes we first assessed our assets, then plotted out the challenges and speed bumps, and finally brainstormed blue sky about “what we want to be when we grow up” as a local news/information gathering organization.

All 17 Wake Weekly staffers participated in this session, coming up with these conclusions: First of all, I kept hearing “we like working here,” and “we love the paper.” This staff has a high level of collegiality, evident during the workshop as an almost palpable sense that these folks realize they are a part of something larger than themselves.

Janet Rose knows how special and rare this is. The bond of trust and loyalty is so strong she says it makes her want to cry sometimes. For example, how the Wake Weekly is weathering the Great Recession is an indicator of their bonds. Rather than see any of their fellow workers laid off, the entire staff cut back on their hours so as to spread the burden evenly and still keep everyone on staff. Thus when Marty Coward says, “Our people are our biggest asset,” he is not exaggerating.

Every journalism teacher wants to see his or her best students graduate and land a job at a great community paper. Little wonder then that the WW has been a newspaper of destination for many UNC community journalism grads and or interns including Tim Conlon, Iris Padgett, Heather Mandelkehr and Carrie Crespo.

The paper is housed, literally, in a lovely two-story house just off a bustling and charming historic main street. That proximity and the paper’s long-standing open access policy contribute to the Wake Weekly’s continued success. “We are the nucleus of this community,” one staffer said.

In addition, the WW has a long tradition of quality community journalism. This culture of excellence is manifested in new computers and professional level Nikon 35mm camera equipment for staffers. The result is a visually robust newspaper that is always chocked full of large compelling photographs and original local content. Staffers are encouraged to be innovative with design — and the results have been terrific. Sports writers Matt Morgan and Tommy Kopetskie put together sports page layouts that knocked my socks off. Little wonder that the WW is a must-read for local high school kids. Yes, that’s what I said: kids reading newspapers.

THE BOONIES NO MORE

Old Wake Forest, back in the day, used to have the luxury of grand isolation, and thus, the paper was THE paper of its region. But no more. Raleigh, spilling and sprawling its way into northern Wake County, has come knocking. In the last decade huge developments have sprouted, full of new residents who may work at RTP and only sleep in Wake Forest. Reaching these new potential readers has been and will continue to be one of the Wake Weekly’s biggest challenges.

Marty says they do it by welcoming the newcomers, then targeting them with coverage of their kids (school news, sports) and local government news that affects their pocketbooks.

The growth has been something of a paradox. While some staffers fear the loss of the old small-town feel, that same expansion of the formerly village-like town has fueled the paper’s growth.

Staffers listed “competition” as one of their “toxic assets.” There’s a new freebie in town called the Gazette, as well as McClatchy’s North Raleigh News that “keeps us sharp,” says Marty.

Even for the very finest papers and most enlightened publishers, this is a challenging time to be in the newspaper business. I’ve heard more than one publisher’s lament: “It’s not so much that the local advertising has dried up — it hasn’t– it’s that advertisers are taking LONGER TO PAY US.”

But I remain confident. Community newspapers will survive and thrive, especially the high-quality indy weeklies with a clear sense of who they are and whom they serve. And the Wake Weekly is still that gold standard.