I want to go to Tiananmen Square, I tell my host.

“Why there?” she furrows her brow. “It’s just a big empty space, nothing to see, just walk around.”

For a pilgrimage, I tell her. In memory of the students killed there on June 4, 1989. And I tell her about that date for me, a teacher at little Brevard College way back in the mountains of N.C., and when I heard the news, I remember being profoundly moved: “What am I doing here?!” I remember asking myself. As a photojournalist, I should be in Beijing! I should be at Tiananmen Square! 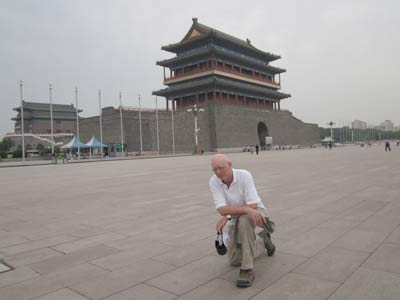 Over the years, Tiananmen has become a symbol of governmental repression. A nation that kills its own children is morally corrupt. Think Kent State and how that event unleashed the fury of a generation. Think Syria today.

And then there’s that iconic photograph and video from Tiananmen Square – a lone slim little man with a plastic shopping bag, facing down a row of advancing tanks. It’s a classic that I show in my History of Photojournalism lecture. I must go see for myself where the students rallied, where the tanks rumbled and where the blood was shed. It is a pilgrimage, I tell my host. She scowls and shrugs. “Hadda hadda hadda.” Ok, OK, OK. Perhaps she is thinking to herself: crazy American.

And of course, the trip is worth it. The square is not so much an edifice to see, as it is a vast stage where history played out. We take a photograph of me, just for the record. I do not smile. 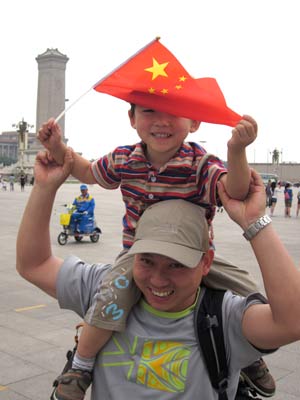 But in spite of the gravitas of the place, life goes on. Chinese families with toddlers waving the “Big Red” of the Chinese flag act as carefree as if this is a Disney theme park. The ironic juxtaposition further accentuating my homage.

Only hours later, riding in yet another dusty no-AC Beijing taxi, do I make the startling discovery: Professor Chen Kai was a student demonstrator at Tiananmen Square! Of course, I had failed to do the math. Of course she was in college exactly at that time. It had never occurred to me to ask her.

She tells me this fact as flippantly as if she were informing me of the weather.

“Why didn’t you tell me when we were there?” I ask incredulously.

“Because it’s unimportant,” she makes a face.

If there’s anything I’ve learned in my brief two weeks here, it’s how complex are these people, how layered is their history and enigmatic and mysterious is their reasoning. That, and how one-sided is my perception of the event. My host confirms it. “Don’t be so naïve. I was there only because we got out of classes; there were buses and free food. We were not serious…it was just fun.” And brushing off the numberless deaths of student demonstrators, she insists that the entire affair was the fault of the student leaders, who she blames for the bloodshed. 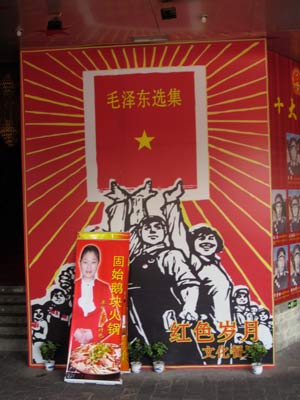 I don’t know what to say. Seeing my look, she suddenly laughs brightly, “I enjoy debating with you!” and the spell is broken. The taxi bumper-car competition weaves on through the dusty streets of Beijing as a pale sun reflects off the Bank of China skyscraper.

Later that day, I am taken to the Cultural Revolution restaurant, a tony hipster joint that has made international news by spoofing Chairman Mao and the tumultuous upheaval of the ‘60s. But the place is shut down, and a watchman tells us it is being “renovated.” I am skeptical and suspect the mocking theme restaurant had crossed party line. When I suggest this to my host, she responds with a typical shrug. “In China, who knows?”

One Response to “A pilgrimage to Tiananmen Square”